Is My Child Called to Ministry?

Kids in Ministry International Comments Is My Child Called to Ministry? 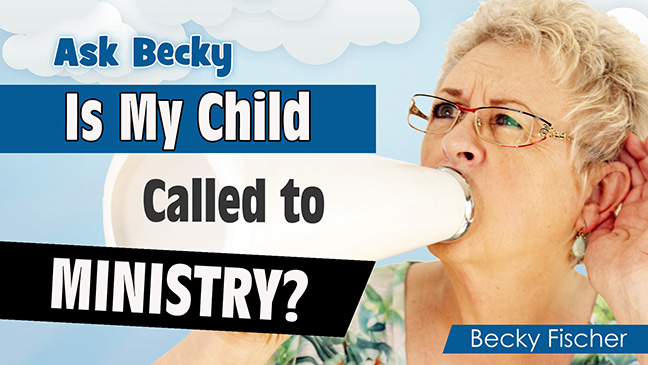 I OCCASIONALLY GET QUESTIONS SIMILAR TO THIS ABOUT KIDS. “Dear KIMI, I would like to inquire if there is any sort of test available that could help kids identify which 5-fold ministry gift, plus the other ministry gifts, they are potentially wired for. Could you advise or help perhaps? Thanks, J.A.”

(For clarification, “five-fold” is a moniker  associated with the five ministry gifts mentioned in Ephesians 4:11—apostle, prophet, evangelist, teacher, and pastor)

That’s really a loaded question in several ways. The short answer is, there may be, but I am just not aware of any. And I don’t go looking and here’s why. I believe childhood is a time of exploration and trying new things. I’m glad I don’t’ know about such a test, because we adults would be much more likely to try to shape them into our preconceived ideas, rather than allowing them to grow and be led by the Spirit and develop naturally into their gifts. Just my opinion.

God’s Call is a Journey

Not once in a million years did my parents or my church leaders ever guess me to be a minister, much less a five-fold minister or an apostle. And looking back it would have caused a lot of confusion in me if people would have tried to pigeon hole me when I was a child or teen. God’s ultimate call on my life was a journey, not a destination. I was 40 years old before I started working with kids on a regular basis. I was 50 years old before I started this present ministry which is now 18 years old.

I spent 23 years in business including management, ownership, graphic arts development, working for publishers to develop writing and editing skills, and so much more. Every single one of those skills were critically important to what I do today in my international apostolic/teaching role.

Though I would have gladly gone, I am so thankful no one tried to channel me into a Bible school or seminary or some other ministry education because I would have missed every skill that was necessary for running Kids in Ministry International today.

One of my pastors was a twin. When they were born God spoke to their mother and told her that one of them was going to be a preacher. She never said one word about until they were grown, and the one son actually entered the ministry and had pastored for a few years. My pastor was very glad his mother did not try to figure out which son it was going to be, and try to shape or direct his life. She let the Holy Spirit do the work.

Everyone Assumed He would be a Preacher

Years ago there was a young boy who lived about an hour or two away from our church, but who’s Christian family would visit now and then. I discovered this boy (from as young as ten or eleven) had an amazing teaching gift. Over time I told him that whenever their family visited the church he had a standing invitation to teach the kids in my children’s ministry. He could quote scripture after scripture, make sense, and actually taught above the heads of the other kids, I suspect.

By the time he was 12 years old he enrolled himself in a Bible school online and completed at least the basic classes. He was also a writer, and published a monthly newsletter of the events of his family, but it also included a sermon in every issue. He amazed me and others that knew him.

There was no doubt in my mind, at least, that he was a five-fold preacher of some sort and would end up in full-time minister. Fortunately, he had very wise parents who never pushed this thought on him, but just let him grow up following his heart and being a regular little boy.

Today this man is in his early thirties, is married and has three small children, and I believe he paints houses as an occupation. I follow him on Facebook, and he is still wholly on fire for God, has amazingly insightful FB posts, and is in the midst of writing his first book. For a season a number of years ago he was a youth pastor for a time, but at this moment he doesn’t appear to be interested in going into any type of full-time ministry. But recently he has been writing a Christian book which is almost ready to be published.

Now, was I wrong? Maybe just my timing was off. Maybe when he turns 50, like me, that God will then call him into ministry as a vocation. But right now, he’s just being a really fantastic Christian dad.

There are seasons in our lives, and if we try to get ahead of God we could really mess up his plans for us. We are not to be the ones who judge what the highest calling on a person’s life is. I’m so glad this young man is just being led by the Spirit day to day.

There may be others who feel differently than I do. But well-meaning manipulation on our part as adults can cause more problems than we solve. Let me give you a hypothesis. Suppose a young child is very prophetic. It’s obvious to everyone around him. So, everyone starts calling him/her a prophet. So how does the child and everyone else interpret that?

First it puts the child in a box of our preconceived ideas of what a prophet is—someone called into the ministry, probably full-time, and to imitate all the other “prophets” he sees on TV, in churches, in books.

But what if that’s not God’s plan for that child’s life? What if “full-time ministry” is not his destiny? What if the child is ultimately called into business, the corporate world, who is to become a prophetic voice to business leaders around the nation. Someone who may ultimately be called in someday as an adviser to the President of the United States? But he missed his true call because all the well-meaning adults around him thought he needed to go to Bible school and end up in a traveling ministry in churches?

It’s a “what if?” We might be able to spot giftings and tendencies in children, but I think we make a grave mistake if we then start calling them a prophet, or evangelist, or pastor, etc. Let God take the driving seat.

Give Them Opportunities to Grow and Develop Naturally

If you think you see tendencies, by all means, give them opportunities to develop them, just like you would if you saw musical or sports abilities in them. But keep your big mouth shut and don’t call them a prophet or an apostle, etc. and let them grow up and allow the Holy Spirit to lead them into what He wants them to be. God is big enough to lead and guide them into their destiny without our interference.

You do your part to spiritually train and equip them in the home without labeling them. Or they may just end up trying to live up to your expectations rather than listening for God’s voice.

Those are my thoughts. What are yours? Please leave your comments below.