Kids in Ministry International News & Views A Wave of Child Preachers in the 1940s and 50s
March 13, 2015 beckyfischer 0 Comments 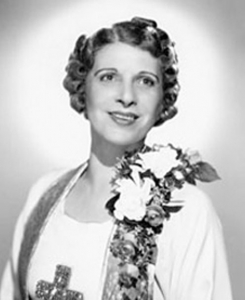 One of the most famous women in Christian history was an evangelist, preacher, faith healer named Aimee Semple McPherson. Also known as Sister Aimee, she was a Canadian-American Los Angeles–based evangelist and media celebrity in the 1920s and 1930s. She founded the Foursquare Church. I could say so much about Aimee, because I have studied her life over the years. She is an inspiration in many ways, a forerunner, and spiritual pioneer in dozens of ways.

But one of the most significant things Aimee did was promote and celebrate children in ministry. During the years she was in ministry, there was an unusual wave of child and teen preachers that hit America. There are over 400 hundred documented cases of children from ages 4 yrs old to teen years, who preached under powerful anointings, many had their own itinerant ministries, most had great evangelistic anointings, followed by strong anointings for healing the sick, and in a few cases even raised the dead. They were known for signs and wonders. Some of those children are still alive today. Many of them were ordained in the Assemblies of God denomination and others. Aimee frequently had these children preach at her infamous church Angelus Temple that was built debt-free during the Great Depression.

Kids in Revival Throughout History

It wasn’t just the kids in the 40s and 50s that have been used by God. From the book  History of the Hugenots* it is written about children in the 1500s “more than 300 hundred children were shut up in the prisons of Uz on a charge of prophesying.” Count Zindendorf who led the Moravians in seeking God for an outpouring of the Holy Spirit wrote that children would be found “praying, singing, and weeping” deep into the night. Young people were filled with the spirit, and children organized intercessory prayer groups which fostered a great missionary movement in the earth.*

Jonathan Edwards, famous for the sermon “Sinners in the Hands of an Angry God” said of his revivals, “ Very many little children have been remarkably enlightened, and their hearts wonderfully affected and enlarged, and their mouths opened, expressing themselves in a manner far beyond their years, and to the just astonishment of those which have heard them.”

The Puritans historical records contain many examples of children who were “marvelously filled with the Spirit of Christ” in early infancy. During Edward’s Great Awakening, children often held their own meetings, which resulted in conversions. Edwards maintained that children were capable of the influences of God.

John Wesley, the great reformer of the 1700s wrote two hundred years prior to the Azusa Street Revival recorded in his journals that children fell into trances, had visions of heaven and hell, went into deep intercession for the lost, and those as young as 3 or 4 would be seen weeping for hours over sin or joy.

We Must See Them Through Spiritual Eyes

God has always used children as partners in ministry throughout history. We must be vigilant to value their spiritual potential and teach them the Word of God, how to hear God’s voice, to be filled with the Spirit, and engage them regularly in praying in tongues, and worship, and mentoring them to heal the sick and believe for miracles.

For more details see my teaching on “Prophetic Children in History”, just one of the sessions in the School of Supernatural Children’s Ministry click on the image below. 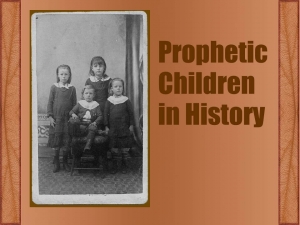 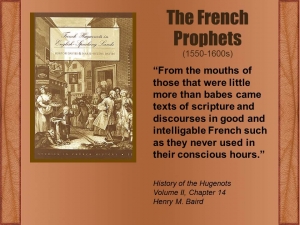 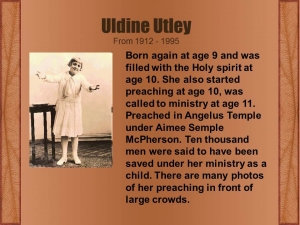 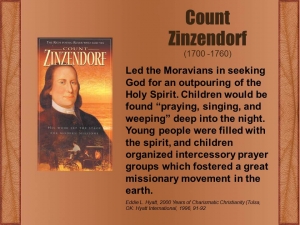 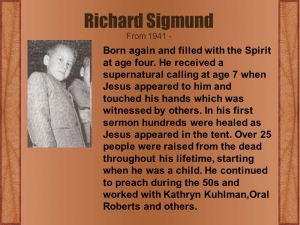