Are My Tongues Real or Fake?

Kids in Ministry International Comments Are My Tongues Real or Fake? 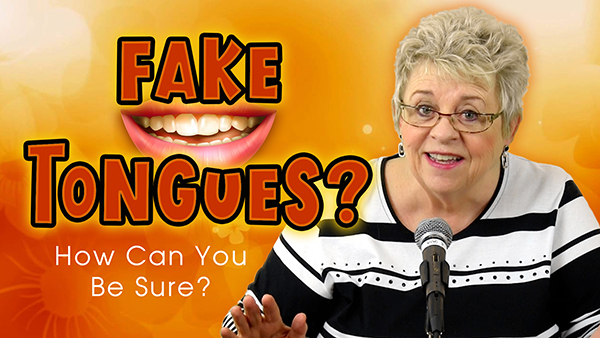 What Does “Fake” Mean?

What does it mean when something is fake? The definition of fake is “something that is not genuine; it’s a counterfeit, a forgery or a sham.” Examples are things like fake designer clothing, or faking someone’s signature, or FAKE NEWS! You can fake being a Christian (except that true Christians will eventually know by the Spirit of God you aren’t for real, so watch it!).

What does the word fake imply? That someone is being dishonest on purpose. They are deliberately trying to deceive others. So, the first thing I would ask you if you are wondering if your tongues are fake is ARE YOU DELIBERATELY TRYING TO DECEIVE YOURSELF OR OTHERS? My guess is that you are not. I am fairly certain that the reason you are wondering is because you genuinely want the real thing, and you don’t want to be deceived yourself. As a parent, or someone who works with kids, I’ll bet you are pretty savvy and know when your kids are trying to fake something, right? We call that LYING.

So, who is the Deceiver? Satan is! He’s a liar and the father of lies. And the last thing the deceiver wants is for you to have a robust prayer life that includes the powerful element of speaking in tongues, so he is going to do everything he can to make you think what’s happening to you is not real! And he is going to lie to your children about this, too. So, you need to help them understand. His tricks have been the same since the garden of Eden when he asked Eve, “Did God really say?” He has always been trying to discredit God’s word. That’s one of his number one tactics!

Now, let me quickly jump in here and say that over 50% of born-again Bible believing Christians believe that ALL SPEAKING IN TONGUES IS FAKE! They do not believe any of it is real. They do not believe it’s biblical. So, we disagree with them. We know it’s real! Many times, people who wonder if their experience is real have been influenced by those who don’t, so those doubts are in the back of their minds at all times.

Are My Tongues from the Devil?

Everything I am saying also includes those who are wondering if their experience is real. Here’s another little add on to this that someone will inevitably bring up – and that is, are your tongues “devil tongues?” Those would be fake tongues, right? They would be counterfeit tongues, so it’s all a part of the same question.

This is one of those crazy theories some people come up with who do not believe tongues are real. They won’t believe that God can legitimately give us the ability of speaking in tongues, but they sure do believe the devil can! WOW! What twisted thinking!

So, let’s settle it once and for all. God’s word says in Luke 11:11-13, “if you ask the father for bread he is not going to give you snake. If you ask him for an egg, he’s not going to give you a scorpion.” Matthew adds, “If you, then, though you are evil, know how to give good gifts to your children, how much more will your Father in heaven give good gifts to those who ask him!”

In addition to this, the verse right before it says, “Ask and it will be given to you; seek and you will find; knock and the door will be opened to you.”

God is a Giver of Good Gifts

Put on your analytic hat and interpret this. God, the Father, is the Father in this scenario. If you ask your Father God for bread, will He give you a snake? That does not sound like the character of our God, right? A snake would not be a good gift. Neither would a scorpion. He has told us to ask. And if we ask, we will receive what we asked for.

So, back to wondering if what you got was fake, or devil tongues, or you are just making the whole thing up. In the New Testament, whenever you read about snakes, who do they represent? DEMONS. What about scorpions? DEMONS! In Luke 10:19 Jesus said, “I have given you authority to trample on snakes and scorpions and to overcome all the power of the enemy; nothing will harm you.” Right here He is identifying snakes and scorpions as demons – the enemy!

If you are a devout follower of Jesus and His Word, He is not going to give you something that is fake. And for those who are wondering if their experience is real, my question is ARE YOU DELIBERATELY TRYING TO MAKE THIS UP? Are you trying to please those around you, so you are pretending? If you are, then stop it! You don’t have to pretend. But my guess is, you just want to be sure it’s real. AND THAT’s VALID! That’s healthy! So be assured the Father knows how to give good gifts to His children! If you have asked, you have received.

Let me tell you a true story! There was a lady in a church who wanted to be filled with the Spirit and speak in tongues. So, she responded to the altar call and went forward and knelt to pray. A couple other ladies went down to pray with her. Unfortunately, the lady was only able to speak a few syllables in tongues and she just kept repeating them over and over again. This went on for an hour. Finally, the dear saints praying with her threw up their hands and declared, “She didn’t get anything!” and got up to leave.

BUT there was an elderly lady sitting on the front row watching everything.  She had been a missionary for many years. When the ladies got up to leave, she interrupted them saying, “No, she got it alright!” The ladies stopped and said, “What do you mean?” The missionary said, “This lady is speaking in ___”and she named the language she was familiar with. “Do you want to know what she is saying?” The other ladies said, “Yeh!” The missionary laughed and said, “She’s saying I GOT IT! I GOT IT! I GOT IT!”

So you never know! Believe and don’t doubt!!!

Now, it’s completely understandable to question such an unusual experience. It’s one of the strangest phenomena that you’ll ever have. And James tells us the tongue is a powerful thing. Let’s remind ourselves that when we speak in tongues, it is the Holy Spirit speaking through us. Why does the Holy Spirit speak through us? Why can’t we do our own talking? Because we are too influenced by our circumstances and what’s going on in the world around us and there are just some things going on in the Spirit realm that are just none of our business. And God can only come into agreement with what is in His word. So, when the Holy Spirit speaks through us, He is speaking the perfect will of God. Again, why Him and not us? The Bible tells us He speaks mysteries through us. We don’t know what we’re praying about most of the time when we are speaking in tongues.

I heard a true story once about a family who was on a road trip, and suddenly their little boy in the back seat got very concerned and shouted, “We need to pray for the people in the boat!” He just wouldn’t give up! So, they quickly prayed what they knew in English, and then the whole family began praying in tongues till the urgency lifted. Long story short, years later a missionary from the Amazon in Brazil came to speak at their church. He began to tell how one time he and his family were in a boat going down the Amazon River when, suddenly, they were attacked by a swarm of killer bees. They were helpless to defend themselves and began crying out to God for help. He said, just as suddenly as they came, the bees turned and disappeared. After the service the parents of the little boy began asking questions about when this took place. They put their experiences together and concluded the family began praying at the very same time the bees were attacking. They didn’t have any idea what they were praying for, but God did! And the missionary was saved.

And one more thing – this might challenge your thinking a bit, and I do a lot of teaching on this that I don’t have time to go into right now. GOD GAVE MANKIND THE AUTHORITY ON THIS EARTH. He’s like a landlord who has rented us His property, so to speak, and He does not have the authority to supersede our authority. So, if he would just come down here to earth and start declaring things, He would be out of line. That’s why he speaks through His prophets, His followers, and He uses us to speak out His will on earth through the power of the Holy Spirit because we are the ones with the authority on earth. I hope that makes sense to you. It’s actually very easy to understand, and I teach children this all the time! You can find those lessons in my curriculums “Our Amazing God” and “God’s Supernatural Kingdom.”

My encouragement to you about speaking in tongues is to just keep on trying and get your mind off of whether or not it’s real and begin enjoying it and using it as often as possible. You will begin to feel faith arise inside of you, and, over time, you are going to see with your own eyes answers to prayer and miracles taking place, and you will know in your spirit that it all had to do with the time you spent praying in tongues! Don’t the devil or people lie to you and put doubts in your mind. If you only have a few words just keep trying. Someone wrote to me the other day and said for the first 6 months after she was filled all she got was a few words in tongues, but she kept going Then, all of a sudden, one day, the dam broke, and she broke out in a flood of supernatural tongues! Praise God!