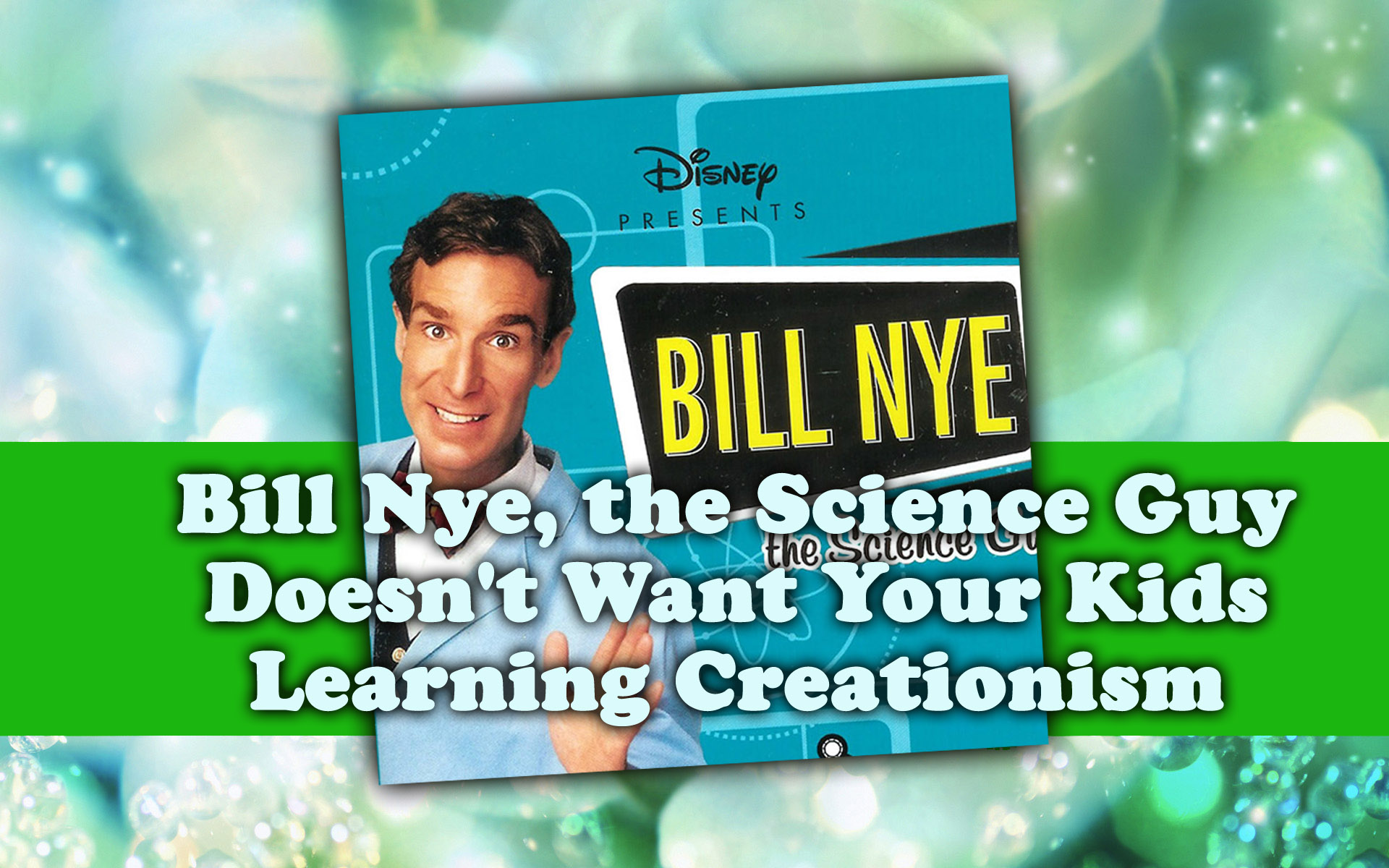 Yesterday I was asked by the Huffington Post to take part in an online discussion on the topic, “Should Creationism be Taught in Schools” alongside of Evolution. They wanted me because of my well-known role in the 2006 Oscar nominated documentary film Jesus Camp. They knew I teach children about creationism and the Christian faith.

The discussion came as a reaction to a video by Bill Nye the Science Guy and Creationism where he said, “and I say to the grownups, if you want to deny evolution and live your world that is completely inconsistent to everything we observe in the universe, that’s fine. But don’t make your kids do it, because we need them. We need scientifically literate voters and taxpayers for the future. We need engineers that can build stuff and can solve problems….It’s just a hard thing…I’m sure in a couple of centuries, I’m sure that worldview won’t exist.” (To see Bill’s complete comments click here.)

Basically, it was a good, healthy discussion, and although I was the only true believer in young-earth, 6-day creationism on the panel, I was treated with respect. Josh, the host, was trying to find a nice way, however, as an evolutionist, to tell me, and you, my fellow Christians, we are from the dark ages. He was amusing in his predisposition on the matter. The expected conclusion to the discussion, of course, was that Creationism has no place in the classroom, that parents have a right to teach their children whatever they want, but to realize that religion is myth and science is real.

There’s no point in trying to argue the stated purpose of the show, i.e. whether kids should be taught creationism in schools. Though I was ready to go toe-to-toe over the issue of “brainwashing” and “indoctrinating” children with God and the Bible, that subject never actually came up.

My Real Concerns Are What Christians Believe

But going past the show, my concerns are not so much what secular scientists believe, but what Christians believe. A quick search on the internet reveals no less than nine different viewpoints of creationism by Bible believing Christians. (Click here.)

I must admit, as a strong committed Christian young person who went to public school, I found it very difficult to balance my faith about creation and God with what I was being taught in school about evolution. I clearly remember when the preachers in our denomination suddenly began talking about the “gap theory.” This was a new school of thought in which they claimed, there’s room between Genesis 1:1 and 1:2 for us to place evolution in the Bible, even though the Bible never at any point ever even alludes to such a viewpoint. This was the belief that after God created the heavens and the earth initially, He then allowed evolution to take its course to do the rest. We Christians all sort of sighed a sigh of relief, that we could somehow now dignify our faith without denying “science” and we went on our merry way. I held that belief well into my adult years.

The Most Biblically Illiterate Generation in America

It was only after I became an “official” Bible teacher of children, doing my best to “rightly divide the Word of truth (2 Timothy 2:25) and teach them the uncompromising Word of God that I ran into the issue of creationism once again. My purpose was to build confidence and trust in our children that, above all else, God’s word can be trusted. If it cannot, then we as Christians are on shaky ground. It has been shown through research that this is the most biblically illiterate generation we have ever had in America, and no doubt the world. I wanted to do my part to turn that around.

I stumbled upon material for kids on the Answers in Genesis website. I ordered some of their DVDs (extremely well done) and my eyes were opened to a world I never knew existed. How I wish I would have had access to this information when I was a teenager. It changed everything for me. Bottom line, I found a renewed faith in the Bible as it is written. I now believe, with full confidence, that God did indeed create the world in six twenty-four hour days, just as it is written. And I have an arsenal of books, CDs and DVDs from a variety of reputable scientists to help me understand how it works perfectly with science without compromising my beliefs.

Why is this important?

There is an interesting word in the dictionary called Syncretism. Syncretism is the combining or union of different or opposing principles, and practices, as in philosophy or religion. It’s the equivalent of trying to mix the anti-biblical beliefs and practices of Hinduism, where they believe in millions of gods, with the Judeo-Christian belief in only one God. In other words, it’s mixing religious oil and water. The point is, they don’t mix.

The children of Israel were famous for this in the Old Testament. They were constantly trying to mix the Baal worship of the day (which by the way, is alive and well in America right now. Click here) with their Jewish beliefs in Yahweh. They were constantly building altars to Ashterah and Baal and others right in the very temple of Jehovah God. All the while Moses was receiving the Ten Commandments on the mountain, Aaron, Moses’ brother, was building a calf idol out of gold that he tried to claim just “magically” jumped out of the fire and appeared.

The Israelites were constantly in trouble, and running for their lives, because of the mixing of two religious belief systems. God was continually angry with them for this. We sometimes think they were abandoning the worship of God to follow other gods. That’s not true. They were mixing—syncretizing—the worship between God and Baal.

Is God’s Word True or Not?

I fear we Christians have been systematically brainwashed over the last few decades being afraid of ridicule, or convinced that, while we can extract our salvation from the Bible, we have to settle part of it as myth.

Our culture, thus the culture our children live in, undermines the validity of God’s word at every turn. It’s no wonder we have such a variety of viewpoints on creationism among Christians. It seems they have all tried to find a way to make the Bible and evolution fit together so we don’t look totally archaic and totally out of touch with reality.

My challenge is this: if we, and our children, as born-again Christians, cannot believe the Genesis account of creation, what else in the Bible must we doubt? If we cannot believe there was a real Adam and a real Eve, how can we believe that God actually sent to His son down from heaven to become a real man and die on a real cross, and that our hope of salvation is real? Either the entire word of God is true, or none of it is true. To mix views of evolution and biblical creationism is syncretism and it has no place in the life of a believer.

3 thoughts on “Bill Nye the Science Guy and Creationism”