Charlie, Charlie, Are Filling a Void? 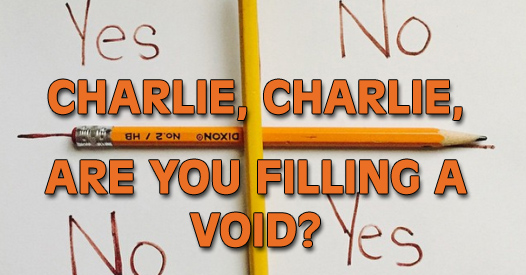 I have said for years that kids, by God’s design, are hungry for the supernatural, and they can find it everywhere but in our churches.

Recent generations have grown up on media that made magic, witchcraft, and the paranormal the focal point of kids’ entertainment. Young Christian friends of mine, who do their homework before buying popular video games, tell me it’s almost impossible to find any that don’t suddenly introduce some form of magic by the third and fourth levels in. It’s just become normal. It’s everywhere. We don’t even think about it anymore. But, of course, since it’s in the form of entertainment, it’s not dangerous…right? But I digress….

With this in mind, we shouldn’t be surprised, when fueled by social media and the internet, faddish games like Charlie Charlie, Splender Man, which are in fact extremely dangerous, and more, catch on and spread like lighting a match to dry grass. Kids are naturally curious and hungry for the supernatural. We had Ouija boards—they have Charlie. No big deal, right? Or is it symptomatic of a bigger issue?

We, and our children, were made with a built in desire to connect with God, hear his voice, and interact with the spirit world. We are, in fact, spirits first, and bodies and souls second, according to 1 Thessalonians 5:23. So where a vacuum is created, something will fill it. If there is a spiritual vacuum of one kind, something spiritual of another kind will seek to fill it. Our kids, today more than ever before, in and outside of our churches, are victims of spiritual predators looking to capture hearts and attention away from the supernatural power of the living God.

What if the Stats True?

If the statistics by Barna are true in his book “Transforming Children into Spiritual Champions,” then the majority of the kids going through our Sunday Schools say, to their knowledge, they have never heard God’s voice nor felt His presence. My question is what kind of Sunday schools are they going to? How can this possibly be true? According to him, it’s pretty much across the board in all churches.

It’s easy to understand this outcome if they are never taught what God’s voice sounds like, nor how He speaks to us, nor told it’s even a possibility that God might talk to us in our homes or our churches. They are left to figure it out by themselves. Some maybe do, but most don’t. But be assured, this generation is “hearing voices” all the time! They just aren’t hearing the right ones, and that’s where we as mentors, coaches, and children’s ministers must come in.

It’s for Everyone Over Age Thirteen

This is one of those spiritual areas where even pastors and children’s pastors many times do not believe children are capable of understanding, appreciating, and engaging in the deeper truths of God’s word and life. So it just never occurs to us to teach them anything about it. “That’s for adults,” we reason.

I sat in on a semi-well-known special speaker once who was doing a fantastic job of teaching about hearing the voice of God. It was an adult service, but the room was full of kids. He had their attention too, with a few of them literally on the edge of their seats drinking in everything he was saying. He ended his sermon that night by saying, “Every person in this room who is thirteen years of age and older needs to know how to hear God’s voice.”

I nearly fell off my seat. He actually believed that. Unfortunately, so do many others. I wondered what all those kids were thinking about then.

Who Needs It More than Kids?

If there is anyone who needs to know how to hear God’s voice clearly, it’s children, because it’s in childhood that we make decisions that will affect the rest of our lives. I often ask adults how many of them would have chosen different marriage partners, or take different professions earlier in life if they had known how to hear God’s voice more clearly? Hands go up everywhere.

Hearing God’s voice is supernatural, and it’s an assumed ability of all born-aging believers. But when we wait, and withhold this information from kids, they are sitting ducks for the enemy to fill the vacuum.

It’s like little Samuel, whom we love to teach about. It wasn’t that he didn’t hear God’s voice. He just didn’t understand what it was he was hearing. He needed someone with more experience to explain it to him. He was then able to hear clearly from that point on.

Hearing God’s voice is a supernatural phenomenon that the Bible assumes every born again Christian will do. “My sheep know my voice,” Jesus said. Big sheep, little sheep, young sheep, old sheep—Jesus says “My sheep know my voice.” It’s assumed. How can we live out God’s will for our lives if we do not know how to be led by His Spirit?

Part of the reason many kids ministers don’t teach on it, is because they themselves have never been taught adequately about how to hear God’s voice. Take me as an example. I was raised in a denomination that believed God led us by open and closed doors. The only problem was that we never considered the fact that the devil could open and close doors, too.

So how were we to distinguish the two? I was literally in my thirties before someone clearly explained to me what the Bible says about being led by His spirit and following His voice. It completely changed my life. Oh how I also wish I could have learned to hear God’s voice in childhood!

Charlie Has a Voice

Charlie has a voice. So does Splender Man. They are silent, but very clear. It will lead our kids into a supernatural place that is filling a vacuum they seldom find in the church. Teaching kids to hear God’s voice is just the one step in satisfying the hunger for the supernatural in the church. But, next to their salvation, it’s the most important step.

I will talk more about how to hear God’s voice in a future article. In the meantime, if you would like resources now how to teach the children in your church on this topic, check out my thirteen week curriculum called “Hearing God’s Voice.”