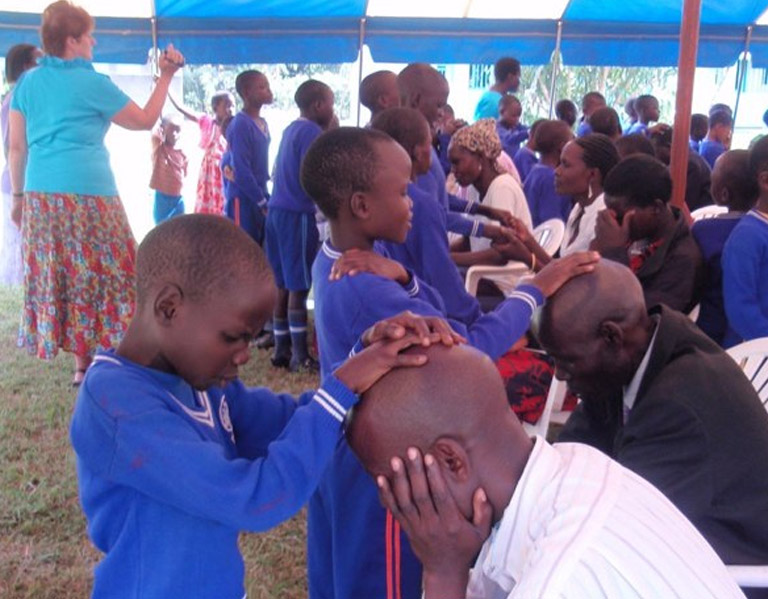 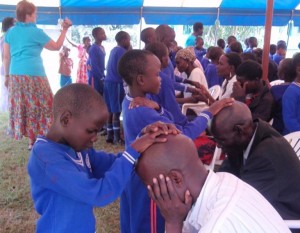 I’m privileged to know many children’s ministers who are as passionate about discipling children to walk in the power of God as I am. Those of us in spirit-filled children’s ministry have a front row view to the supernatural operating through children around the world. One such children’s pastor is 25 year veteran Beryl Voorhoeve, from the Netherlands.

Many Christians have become comfortable with knowing children can prophecy and even heal the sick. But what about casting out demons? This is something most adults shy away from. The very thought of training children to do this seems irresponsible at best! But children are very capable of taking authority over demons when taught in age appropriate ways.

Beryl was invited to teach 48 orphans in Uganda about the supernatural power of God. For five days, the teachers suspended normal classes to allow Beryl to minister to the children. They had specifically asked her to conduct a “School of Supernatural” for them. She diligently taught them everything from the basics of how to hear God’s voice, to prophetic ministry, to sessions on casting out devils. (Remember—in Africa, witchcraft and demonic activity are everywhere! It’s a very common part of everyday life for them.)

At the end of their school, they received an invitation to go into the local prisons; one for men, and the other for women. The children began ministering to the inmates with praise and worship. They then decided it was time to lay hands on them and begin praying.

It’s Because of all Those Demons!

Beryl stood by the side of a little boy about 7 years old. He took the hands of one of the inmates. Looking him in the eye, the boy said, “Mister, do you know why you keep coming back here? It’s because of all those demons you have inside of you! You have to accept Jesus into your heart, and tell the demons to go, and you’ll be fine. You won’t have to come back here anymore!”

While the boy talked, the prisoner began to cry. The child led him in a prayer to receive Jesus, prayed deliverance for him, and the man was set free.

At the women’s prison while the children worshipped, the ladies showed no signs of emotion whatsoever. But as the children laid hands on them and pray, demons started manifesting through them all over the prison grounds.

One woman fell down in front of a little boy. She was frothing at the mouth and grinding her teeth. The child looked up at Beryl as if to say, “What do I do now?” Beryl simply said, “You know what to do. We had classes on this. Tell the demons to go.”

So the child began to cast out devils right and left! The other children followed suit, and many of the women of that prison were set free!

A close friend of mine in Tanzania, Pastor Glorious Shoo, has a Christian, English speaking school in Moshi, where he brings in the poor children to give them a free education. He is known for his generosity to the poor. Glorious uses our curriculums for their Bible lessons, including those to heal the sick and learn to hear God’s voice. These children are amazing in their spiritual maturity through the diligence of their teachers and leaders.

A mother came to Glorious begging to have her son allowed in his school. She told him three other schools had kicked her son out because he was such a discipline problem. She said, “You are my last hope, because no other school will take him.” Good-hearted Glorious let him.

As soon as he began attending classes, the child began to display abhorrent behavior. He would fight with the other children, curse, pull their hair, kick them, and just be abusive in a variety of ways. Finally, the Christian boys and girls just had enough of this behavior. A group of them came to conclusion the child had a demon.

One day at play, with no teachers or other adults around, the children circled him, pushed him to the ground, and began casting the demons out of him. The child was wonderfully set free. Glorious shared with me later, the little boy became one of the best students in his school.

While these may be shocking reports to many, we need to realize that our children are no longer reserved forces in the army of God. God sees them as active participants in His kingdom. It’s up to us to train and equip them with the supernatural power of God!

For Resources to help you raise a supernatural generation, visit: https://kidsinministry.org/resources/