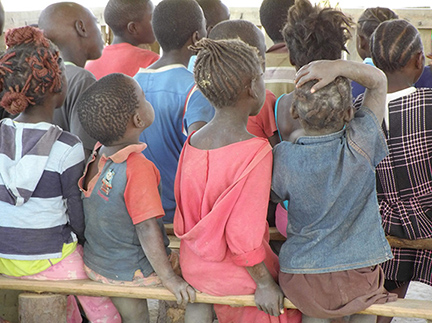 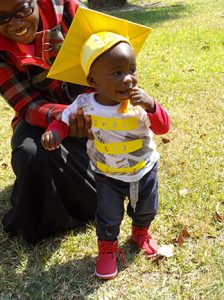 The future of KIMI Africa!

“I BELIEVE YOUR VISIT WILL BE KEY TO THE FUTURE OF KIMI AFRICA!” wrote KIMI Zambia leader Malene Anderson to me. Those words, I know, are prophetic, but the full impact, of course, is yet to be seen. I had received a stern word from the Lord through Patricia King that I was to “plant my feet in Africa.” There was no misinterpreting that order. While I have been more than happy to let my other leaders go to the “hard” places, the uncomfortable-to-the-flesh places, I knew I could no longer put it off.

Through hours of preparatory prayer, my only instructions in advance was to just go and “listen.” It was very eye opening to do so. I listened for hours to each of my leaders tell their personal stories and journeys. One thing was loud and clear: in spite of many obstacles, struggles, and even persecution, they are completely devoted and dedicated to Kids in Ministry International, our vision for children, and their PowerClubs.

Our meeting place was in Ndola, Zambia, where I have a Danish director who has lived in Zambia for seven years with her husband and children. She is totally devoted to that nation, and committed to it for life. She told me Zambia is her home, not even Denmark takes precedence in her heart. Because of this, I learned so much about the African culture and people through her compassionate and dedicated eyes. She could “interpret” what I heard in English through cultural mind-sets. 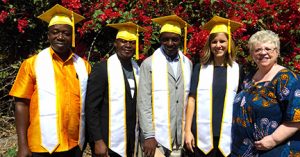 All of my directors in Africa are graduates of our School of Supernatural Children’s Ministry.

While we have a growing number of people in Africa who are graduates from the School of Supernatural Children’s Ministry and who are launching PowerClubs and training others in their regions, I have only three official Directors, and one regional leader who functions like a director. All are pastors: Paul Mwangi, KIMI Kenya, Francis Opoku, KIMI Ghana, Malene Anderson, KIMI Zambia, and regional director David Cheni, Uganda. Those were the only ones invited to this “summit,” and I had to pay for all airfares, bus fares, housing and meals. That’s a sizable tab.

Each of these dedicated leaders work without a working income from us, though we give them a small stipend plus our best efforts in paying for the printing of curriculums, and covering the expenses of PowerClub training conferences. It is our prayer to be able to give more for the work they do.

Paul has 152 PowerClubs under his oversight. David has 156. Francis currently has 26, though in the past he had many more, but due to finances, he lost many leaders. Each have zonal, 2nd tier leaders who help them with over-sight. All PowerClubs are in different stages of growth and development, doing the best they can in cultural contexts. 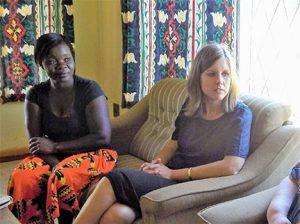 Eva, on the left, told us amazing testimonies of children walking in the supernatural power of God.

Malene did us a great favor by inviting three of her top PowerClub leaders to meet the rest of us on day three of our meeting. Mind-blowing testimonies flowed out of them, such as ones from Eva, a pastor’s wife and mother of five children. She had been a Sunday School teacher for years, and as is common, that meant she stood in front of the children each week and simply read from the Bible like you would adults. When she first attended a PowerClub training, she was in great doubt that children could actually receive from God, and be used by Him in any way. But she decided to try anyway. She started a PowerClub in her home, and the first miracle she saw was in her own children.

Her five year old son had bone cancer, and was scheduled to have his leg amputated. But her two-year-old would not accept it. He began to pray for his brother. When the older boy showed up for his operation, the gangrene had disappeared, and the operation was cancelled. But he still required crutches to walk.

After three months of using crutches, one day Eva overheard her two-year-old shouting, “Walk, in the name of Jesus! Walk, in the name of Jesus!” When she entered the room to see what they were doing, the small boy was holding his brother’s crutches just out of reach and enticing his brother to come for them, which was requiring him to walk. By the end of the day, the crippled child was walking normal without the crutches. That made a believer out of Eva about what children could do. Today her son is completely healed.

A Witch’s Curse Is Broken! 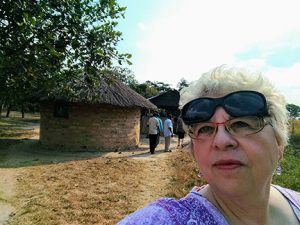 We visited the small village where our first Zambian PowerClub was born. Amazing stories of the Holy Spirit falling on the children with no one laying hands on them.

Later she expanded to PowerClubs outside her home. She personally leads ten PowerClubs weekly within a 40 km (24 miles) range. She says there are approximately 1600 children in those clubs. One includes a local school who invited her to lead a PC once a week before their entire student body. That school has 1700 children. She also oversees another 26 PowerClubs started by people she has trained. You do the math…we’ve lost count.

Once she led a large 3-day conference of about 900 PC children. She took them on a prayer walk. As they were about to cross a stream over a bridge, one small girl said, “Stop! We can’t cross over till we pray!” She was so insistent, Eva finally had the children pray. They crossed the bridge, finished their prayer walk and returned the same way. The little girl shouted again, “Stop! We cannot cross the bridge till we pray!” So Eva once again had the children pray. Suddenly, an old woman, who was a local witch, came running out of the bushes.

She cried, “Stop praying! You are burning me!” She told them that she had placed a witchcraft token that had been cursed in the stream of water. It’s purpose was to cause accidents and harm to people who crossed the bridge. That bridge did have a reputation for accidents. She said, “Every time you pray you are burning me!” obviously feeling a real burning sensation. Two more witches then stepped out of the bushes. Eva lead them in repentance, and two of them accepted Jesus as savior. The third witch, Eva told us, “died later in her sins.”

A Dying Man Was Healed 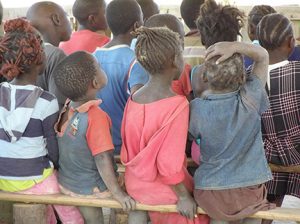 These are Zambian PowerClub children, the same type as the children in our testimonies.

I am uncertain if this was the same prayer walk, but as Eva and her leaders took the children out, they were planning to go in one direction, and a seven-year-old boy said they should go a different way. He had seen a picture of a house they needed to go to, where they needed to pray for someone. As they came to the house he saw, there was a woman sitting outside. Her husband was inside, who had not gotten out of bed for months. He was dying. Eva told them why they came, and the woman asked, “How did you know he was sick?” “By the power of God,” was the answer. She and the child entered to see the man. She said the stench of death was so strong, they could only stay in there for a few minutes. But the boy laid his hands on the man, and prayed for is healing. They left not seeing any immediate results.

But Eva returned the next day to see how the man was doing. As she approached the house, she saw the man sitting in a chair outside with his wife eating porridge. He had been healed in Jesus’ name! Eva was full of these types of stories. All because someone taught her that children could be used by God to walk in supernatural power! As many people say, Eva told us the KIMI curriculums are not just for children, but adults learn from them too.

By Faith We Hit the Reset Button in Africa

Do all of our PC leaders have stories like this? No. The strength of a PowerClub depends on the leader. Just as in western cultures, a frightening number of pastors and churches have no sign of the Holy Spirit operating in their congregations. But we are thankful for every story we heard and we know there are more to come! THANK YOU for your support and prayers as we continue on.

THE GOSPEL IS FREE, BUT…… 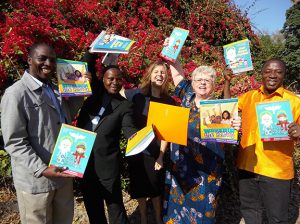 We brought brand new curriculums, designed especially for Africa, to our leaders to take home to their PowerClubs.

…as you know, getting the Gospel in the hands of the people is not. One of the amazing blessings God gave us when He sent Malene to KIMI is her unusual ability to write and speak in very simple terms that are easily understandable to the African people, as well as other 2nd and 3rd world people. She has taken my more complex curriculums, written for Western cultures, and reduced them in to smaller lesson plans, and culturally relevant object lessons, and examples. They are a treasure to us! It was my delight to take a copy of all of them to the leaders. It was the first time Malene got to see her work in print.

We have attempted to do this before, but Malene (and her professional graphic artist husband) made it successful.
They were so good, we started publishing them here in the States as family devotionals, and mini-lessons, as cheaper versions for small churches with little to no budget.

As I write this, after our African summit with freshly inspired directors, we now need to get these new curriculums into the hands of our indigenous leaders as quickly as possible. Please consider giving above your monthly donation as a one time gift to help us print these in each nation right away.

(Please note 20% of all donations go to Administrative needs in the home office.)