God Uses KIDS to Do Miracles! 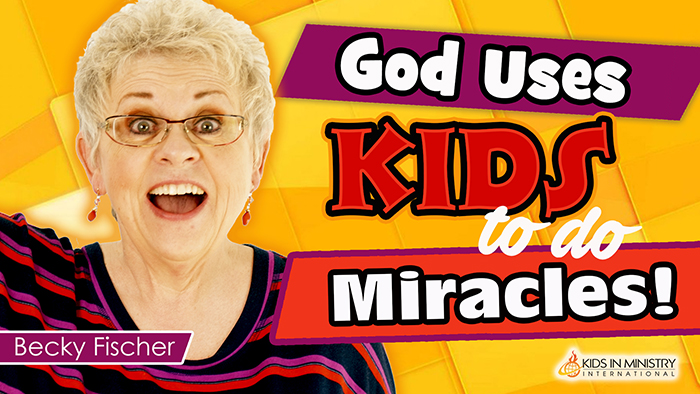 God uses kids to do miracles in the name of Jesus! It’s happening all around the world, and it’s actually been going on for years! In this video, we will be sharing some of the most profound miracles that have occurred in our ministry—Kids in Ministry International. You don’t want to miss these testimonies and stories!

What Kind of Miracles?

SO – what kind of miracles are we talking about? Well, I want to warn you. These stories are not for the faint of heart. And if you don’t go to churches that believe in miracles, or you are a skeptic in general, you will find them completely unbelievable! Most of you know that kids can hear God’s voice and prophesy. It’s becoming very common in today’s world. I have talked about this in many previous videos.  But I want to go for the extreme stories today that Jesus said all believers can do—regardless of age or gender! In Mark 16:15-18 He said, ‘And these signs will accompany those who believe: in my name they will drive out demons; they will speak in new tongues; they will pick up snakes with their hands; and when they drink deadly poison, it will not hurt them at all; they will place their hands on sick people, and they will get well.”

He added in Matthew 10:8 that His disciples would cast out devils and raise the dead!

So, buckle your seatbelt, because the kids in our ministry have done all of these things!

Training in Many Nations

For those of you who are not familiar with our ministry, we have trained children’s ministers in 27 nations. We have a school called the School of Supernatural Children’s Ministry where our focus is to help leaders equip boys and girls to walk in the supernatural power of God. We believe this should be normal children’s ministry.

To make this happen I have written many curriculums to help them dig deep into God’s word and see what the Bible has to say about this. Then we teach people how to get kids out of their seats and show them in practical hands-on ways how to do what they’ve been taught.

Hundreds of leaders around the world then start little children’s ministries that we call PowerClubs. We currently have over 1,000 powerclubs around the world and at any given time there are up to 35,000 children who attend them on a regular basis.

The stories I am going to tell you have come from our PowerClubs and other children trained through our curriculums and training events.

Tommy and His Aunt

I want to tell you about a little 6-year-old boy named Tommy. His mother and grandmother taught the preschoolers in their church from our curriculum Preschoolers in His Presence. In this curriculum we teach children ages 3 to 5 years old everything we teach the older kids, but just in very short lessons. This includes hearing God’s voice and healing the sick.

Well, Tommy spent three years being taught from this curriculum. One day his aunt got deathly ill. She was so sick she was confined to bed and did not want to see anyone. When Tommy heard this, he went to his mother and said, “I want to go and pray for Aunt Judy to be healed.”
His mom said, “Well, you will have to pray from here because she is so sick she doesn’t want visitors.”

“But God told me to go and lay hands on her and she would be healed.”

“But God told me to go and pray for her and she would be healed!”

He would not give up. He harassed his mother to the point she gave in and said, “Alright, we’ll go over there. But they are not going to let you in the house.” They got in the car, drove over there, went to the door, and the woman’s adult son came to the door.

Tommy said, “I came to pray for your mom.”

The son said, “Sorry, she doesn’t want any visitors. She’s too sick.”

“But God told me to come and pray for her, and she’s going to be healed!”

They argued back and forth for a couple minutes, and then just had a staring contest. Finally the man said, “I don’t know why I’m doing this,” but he let them in the house.

They found the woman deathly ill and in bed. And when Tommy and his mom walked into the room, she just groaned and told them to go away. But Tommy said, “God told me to come and pray for you, and by tomorrow you are going to be all better.”
She was so sick she didn’t have the strength to argue. So she let tommy lay his little hands on her, and pray a very simple prayer.

Within minutes, the woman sat up in bed, got up, and went looking for a piece of candy to give to Tommy. And, as he said, within24 hours she was completely healed!

One of our leaders in Burundi East Africa was in a village training children’s workers how to teach their children to heal the sick. She taught the lesson, and began to demonstrate how to lay hands on people to pray as the Bible says. But she said that the building they were in did not have windows, and all the children in the neighborhood were leaning inside watching every move she made and listening to every word. She thought, “What a golden opportunity to show these teachers how to train children!” So she invited the kids into the building and taught them how to lay hands on people to pray. She asked the adults, “Are any of you actually sick with anything right now?” Well, there were things like headaches, colds, stomach aches, etc. So she taught the kids how to pray, and every one of those people were healed! They were so excited!

Then, all of a sudden, an old man who had been sitting on a tree stump outside began to holler loudly, “Mazungoo! (mzungu – that means white person in Africa) Mazungoo, bring those children over here to pray for me!”

They went outside to see him, and the people told her that he had been crippled for many years. Everyday his son would bring him out to this area to sit on this stump and at night he would come and get him. He couldn’t walk without help. She was also told he had been known his whole life as a womanizer, and abusive to his own wife and children. He had been an alcoholic all his life.

Well, the children laid their hands on him, and our leader led them in a simple prayer for healing. She said as they were praying she noticed one of his thighs began to quiver a little bit. She took it as a sign, and in faith told him “stand up and do what you couldn’t do before!”
He very slowly began to do so. After a moment, and getting his balance, he slowly took a step. Then another, and another, and all of sudden he began to walk normally, and he took off down the road and back again, completely healed!

The next day was Sunday, and he came to church that day with his whole family, and they all got saved!

3 – Girl in India alcoholic father. Anointed him with oil.

4- Kids alone in house in India and a python snake came in. They rebuked it in the name of Jesus, and it turned and went away.

5 – A Christian school in Tanzania run by a good friend of mine who has been using our curriculums for many years and raised an entire generation of kids on them. Mother came to Glorious(which is her name), asking if her unruly son could come to his school. He let him, when he began manifesting demonic activity.   The kids got tired of it, and one day a bunch of them cornered the child, pushed him to the ground and began to cast devils out of him. From that day forward, he was a perfect student and became a fine scholar.

6 – Kids in Kenya cleaned out a hospital of sick women.

Raising a Baby from the Dead

7 – Estevan raised a baby from the dead!

I know there will be many who don’t believe these stories. They may even think I made them up. Well, I didn’t. I’ve forgotten more stories than I can remember. I try to write them down. Then I forget where I put them.   But these are real. Now why is that important? Because the Bible said in Joel 2:28 that in the last days He would pour out His spirit upon all flesh – that includes boys and girls—and your sons and daughters would prophesy! And Jesus Himself said you are going to do greater things than Him if we asked in His name!

You know that thing about the “faith of a little child”? Yeah! Well, kids have 100 times more faith than adults do. The problem is they need someone like you and me to show them what to do. They need us to get serious about discipleship and equip them to walk in the power of God.

Heidi Baker said, ‘The greatest hindrance to a child walking in signs and wonders is the doubt and unbelief of the adults in their lives!”

I think it’s important for you to know that I did not personally teach or train any of these children. They were all taught by men and women just like you who took the time to learn what they needed to do to get their children equipped to walk in the supernatural power of God. Why is that important? Because it means you to can train your kids and you can see your own kids doing similar things.

If you would like to be trained to raise up a Joel 2:28 generation, I encourage you to check out our online training course the School of Supernatural Children’s Ministry. And you will have your own testimonies to tell in no time!

Thank you for watching. You may or may not know that kids in ministry international is a non-profit 501c3 doing much work in developing nations, which means we need your help in keeping all of our youtube content free to the public and helps us get our mateirals free of charge into their hands. Please consider making a tax-deductible donation today. I’d really appreciate your support.