Though they are furlough indefinitely in the USA, and KIMI Burundi is not functioning at this time, Astrid and Travis Withrow and their five beautiful daughters were full-time missionaries for over seven years in Burundi and Rwanda. Several of those years they led KIMI Burundi-Rwanda PowerClubs and did a magnificent job of establishing PowerClubs.

Their vision is to teach the Burundians self sustainability, holistic living, and social-economic development. But after hearing about the vision of KIMI raising up a supernatural generation of children, they felt it was perfect spiritual ingredient for their SOZO Ministries Africa.

In October of 2009, KIMI sent Kenyan Director Paul Mwangi to the Withrows to help train them to launch PowerClubs in war-torn, spiritually devastated nation of Burundi, famous for its genocide and tribal in-fighting. Seventeen different denominations, churches, organizations and associations were represented among the 38 trainees at that first meeting.

Even though there was a strong outpouring of the Holy Spirit on the attendees, and they could see the powerful impact of the PowerClub ministry, Astrid waited for a year praying and asking God if this was the direction they were to go. It became clear this was indeed the plan, and Astrid began to aggressively strategize how to launch PowerClubs across Burundi. She has since taken teams across Burundi for over a year doing PowerClub trainings in areas where militia watch over them with machine guns, where the locals regularly poison the food of strangers, and in places where child-sacrifices are still made on a weekly basis. Undaunted Astrid and her team have launched 27 new PowerClubs in just the first year. As of 2012 she and her team have trained more than 304 leaders, have over 90 registered PowerClubs, and their PowerClubs now are reaching nearly 7,000 children every week. 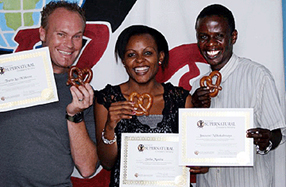 Testimonies of the healings and miracles that come from the PowerClub children are awe-inspiring! Children are talking to their parents about reconciliation with families of other tribes and faiths, and the adults are responding. Fighting families are reconciling. In one area, a Burundian official told Astrid before she started the PowerClub there were at least 80 murders every month in that city. But after the PowerClubs began, the murder rate dropped to only 20 per month! The official told Astrid, “Your PowerClubs are more effective than the UN is here!!!!” Glory to God!!!

In 2011 Astrid and Travis both became a certified graduates of KIMI’s School of Supernatural Children’s Ministry, along with two of their leaders, and Astrid accepted the position of Director of KIMI Burundi-Rwanda. 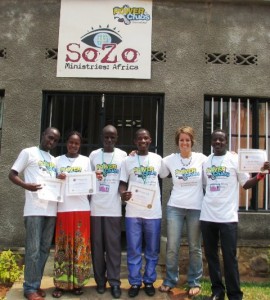 Astrid writes, “Today [Aug 17, 2012] we celebrated the graduation of our four School of Supernatural Children’s Ministry students. We are so proud of them doing this in English, a 3rd or 4th language to all of them. They love it! And three of them get to travel to be part of the 1st ever KIMI Africa Leadership Conference in Uganda! So proud of the all! You are looking at serious transformation bringers here!  — at Mutanga Nord, bujumbura Burundi.

We pray that the Withrows will one day be able to go back and resume their wonderful ministry.