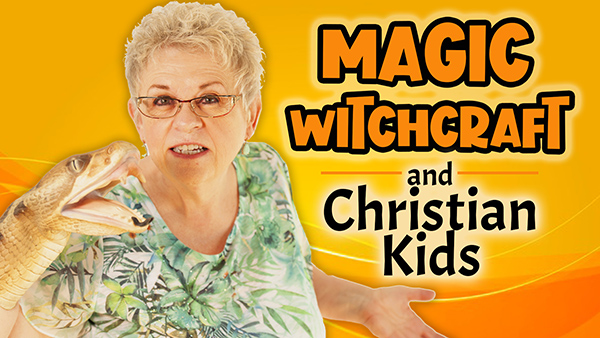 Do you wanna know how to start a big fat fight amongst children’s pastors? Just dare to say that we shouldn’t let kids watch movies and read books about magic and witchcraft! Boy, do the knives come out! It’s almost split down the line 50/50. It’s amazing how many Bible believing kids ministers think there’s absolutely nothing wrong with our Christian kids entertaining themselves with magic and witchcraft! Because after all it’s just entertainment!!! So, in other words as Christians we can can watch any kind of genre no matter what the topic is, and as long as it’s in a book or movie, it’s just make-believe and it’s all harmless! Are you kidding me?

It all started with Harry Potter

This whole thing of entertaining ourselves with magic and witchcraft was exposed like a deer in the headlights during the days when Harry Potter was so popular! You know, back when the Millennial generation were still kids. Those of us who opposed this practice, were mocked and laughed at as extremists. Kill-joys! Wet blankets! Religious fanatics among our own Christian peers. “Kids know the difference between make believe and reality.” They said! The dividing line to prove that it was all harmless seemed to be whether or not a kid began to actually explore real witchcraft and tried to become a real witch themselves. The idea was if my kid did not try to become a real witch, that proved that watching those movies was harmless!

Fast forward and today we live in a world and culture that has been saturated with all types and levels of magic and witchcraft related entertainment. There is hardly a cartoon, a video game, a movie or book right down to our little preschoolers that are not affected in some way. Our Christian kids have been left to helplessly navigate the dark side of the supernatural landscape all alone. And a shockingly until recently few Christian parents have had any qualms about magic and witchcraft, basically because they grew up in the same magically bombarded culture when they were kids so it’s normal to them. After a lifetime they have become desensitized to the seriousness of the issue for Christians. No one ever taught them the dangers because, after all, it is just entertainment. So, they continue allowing their children to engage with the same genre of media.

The Millennial Generation is Defined by Harry Potter

As an example, today’s parents are primarily Millennials. When the Millennials were growing up back in the day ABC Family Television Network (now called Freeform) said, “The Millennial Generation is defined by Harry Potter.” Imagine having your generation defined by magic and witchcraft. If kids didn’t watch or read Harry Potter they were considered outcasts. Weirdos. It was then that church leaders joined in and celebrated and promoted the series as harmless entertainment. To this day this represents a huge chasm of polarizing beliefs and opinions in the church. But today add to it the revival of the Smurfs, Pokémon cards and Pokémon Go, and a list so long it’s pointless to try to name them all because new ones come up all the time that will make this video outdated quickly.

However, 20 years later after Harry Potter what do we find? Research shows there are more Millennial witches today than there are Presbyterians.1 Other headlines of popular news media include, “Witch population doubles as Millennials cast off Christianity.”2 Number of Witches Rises Dramatically Across U.S. As Millennials Reject Christianity3 and ‘Looking for a little magic’: Millennials and Gen Z embrace witchy, New Age spiritualism. 4 No impact, right? Yes, of course, much tadoo about nothing, right? Harmless child play.

So then what’s the big deal if we let our kids watch and read and play these forms of entertainment today? Has it become less harmful today?

According to Carolyn Elliott, founder of Witch magazine. “The rise in witchcraft is likely more than a trend. We are in the midst of a beautiful, occult, witch renaissance,” she says. Her comment appears to be in line with the ever-increasing reach of the occult into the general population. In a series of three surveys conducted from 1990 to 2008, Trinity College watched Wicca rise from 8,000 practitioners to 340,000. Now, however as Pew reported in 2014, that number has risen to as many as 1.5 million among the generation that has been defined by Harry Potter.

Regardless of the stats, I do not believe our biggest problem is seeing our kids run to paganism and the occult like Wicca. If it were that obvious, none of us would be stupid enough to let our kids indulge in such entertainment. However, here is what is not as obvious with the naked eye. What other spiritual doors does this open in the lives of our children when they indulge their curiosities in the dark arts? Are there lingering effects that may not even be recognizable for a few years down the road yet? Could it open the door for unexplainable sicknesses or diseases?

How about nightmares or night terrors (not the medically defined night terrors, but actual visitors in the night? Could it affect their finances down the road as they mature, their jobs, or relationships in very negative ways. By opening the door in such a simple way, we give the Enemy permission to interfere in our lives. In some cases it can take years down the road to see the full effects. So it’s hard to connect the dots.

Here’s a question for you Christian parents — if harry potter would have existed in the days when Jesus was a little boy, where he studied the Torah and the prophets regularly, do you think his Jewish parents would have let him go see the movies about witchcraft as entertainment? If you do, then you know nothing about Jewish culture or the word of God!

This was probably the number one defining difference between Israel and their pagan neighbors. There was no wiggle room in how they were to treat magic and witchcraft. It was profoundly condemned. There is no way God would have winked as Jesus went into a movie theatre about magic and witchcraft, saying, “Oh it’s just entertainment. Jesus is a smart kid. He knows the difference between reality and make believe!”

Kids in the Old Testament worked at and practiced magic and witchcraft. Check out Isaiah 47:12, and he didn’t approve of it. He mocked them saying, “so keep on, then, with your magic spells and with your many sorceries, which you have labored at since childhood. Perhaps you will succeed, perhaps you will cause terror.”

Here’s another point – The Bible says that rebellion is like the sin of witchcraft and stubbornness is as bad as worshipping idols. You have to be blind not to see the connection in the Bible, in both the Old and New Testaments, between rebellion against God and witchcraft. They were one and the same. Where our kids might not be engaging in real magic, by watching it they are feeding on rebellion and stubbornness so rampant in our culture today.

And with it comes a mocking spirit against the things of God. Rebellion. Stubbornness. Depression. Fear. Anxiety. And add to that a serous arise in atheism like we have never experienced in our nation. Is all this really unrelated? I think not. Personally, I think the relationships go far deeper than we ever dreamed. They’ve been subtle. Almost hidden. But they were there all the time.

Am I being extreme? Let’s look at another angle. At the moment, the headlines of every news media in America is reporting about the blatant rebellion against authority, police, and the violence and destruction in our streets at the hands of Antifa and Black Lives Matter (BLM). Simply do your homework  and you will see the founders are self-identified witches specifically a brand of African witchcraft in which the ancestors of the dead are summoned and worshipped  up to help them in their key aspect of social justice strategy. And by the way, they are Millennials. Now I realize there are a lot of other things going on in our culture that factor into this rebellion than just watching movies about magic. But you can’t deny there’s a connection!

What About our Imaginations?

Let’s talk about our imaginations for just a minute. Albert Einstein said, “Imagination is more powerful than knowledge. Imagination is everything. It is the preview of life’s coming attractions.” Jesus also had a lot to say about our imaginations in several places, even though he never really used the word. Do you remember when He taught that if you simply looked on a woman to lust after her, it was the same as actually physically committing the sin of adultery. When you’re looking your are using your imagination.

So watching movies, reading books, and playing games of any kind are wonderful privileges and powerful tools that activate our imaginations. We decide who gets access to our imaginations and as parents we need to carefully control the gate of what your kids will feed their imaginations on.

Kids are Hungry for the Supernatural!

I have said repeatedly since this ministry began, “Kids are hungry for the supernatural.” I constantly preach to anyone who will listen that they are drawn to the supernatural like a moth is drawn to the light. Unfortunately, most of the time they can find the supernatural everywhere except in our churches. It should be in our homes and churches they should be learning to hear God’s voice, be led by the spirit, discovering how to heal the sick, and doing signs, wonders, and miracle. It’s no wonder they are flocking to Harry Potter and others like him! They are filling a deep spiritual need in their heart of hearts that the church has ignored!

HOW ARE OUR KIDS EVER GOING TO LEARN HOW TO CAST OUT DEVILS IF THEY SPEND ALL THEIR TIME ENTERTAINING THEMSELVES WITH DEVILS???