More Effective than the United Nations

It was really a routine contact when Dutch missionary Astrid Withrow and her American husband, Travis, contacted Kids in Ministry, asking for help being trained to do PowerClubs. They found us on the internet. Since they were living in Burundi, East Africa, it made financial sense to send out KIMI Kenya director, Pastor Paul Mwangi and a helper, instead of going ourselves.

The training went well, but we didn’t hear a lot from them for about a year. Then Astrid decided she wanted to go through our School of Supernatural Children’s Ministry correspondence course and ordered the DVD’s. Suddenly, it was like she was set on fire. She and Travis began training a small team of Burundians, and they began blazing through the struggling nation of refugees (many run-aways from neighboring war-torn Rwanda) and trained men and women to raise up PowerClubs. In one year’s time they had launched 82 PowerClubs ministering to over 3,000 Burundian children. No one had ever had that kind of success in KIMI before in such a short period of time! 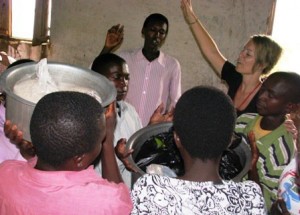 Without asking for any financial help from us, many times they barely scraped enough money together to pay for the trainings, which includes paying the transportation, housing, and meals for each of the attendees. Astrid faithfully sent us reports that left us amazed. She told of having barely enough rice to feed her students (who had never had the privilege of being trained in children’s ministry of any kind.) But with open windows and doors, and sometimes meeting with only a roof with no walls, the village children would stand in the openings watching everything they said and did.

When mealtimes came, there was no way they could turn away the hungry children, and feed only the adults. Understand that the average IQ of a Burundian is only 58 because of starvation and malnutrition. So believing God, Astrid’s team fed the adults and the children. Many times in her reports Astrid would tell us there clearly was only enough food for the adults, but an obvious food multiplication took place. Every adult and child were fed with no problem! 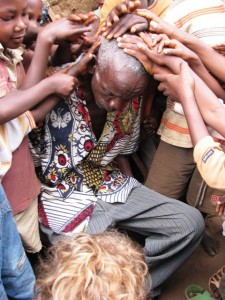 During a PowerClub training, teaching the people to heal the sick is standard procedure, because they are expected to teach the children how to do it in the PowerClubs. So, they ask for the sick to come forward. But if there are children standing on the perimeters, they will call for them to come in. The Withrows then walk the children through the steps of laying hands on the sick, and how to pray. The teachers always are surprised when they are healed on the spot.

One day, as they were having their healing lesson, an old man sitting across the street from their meeting place overheard everything they were saying. He began to shout to the “mzungu” (white person), “Come over here! Pray for me!” He was actually interrupting her teaching, but, finally, she took the group of children across the street.

The old man had been known as the town drunk and wife beater. He had been a womanizer throughout his life. But now  he was crippled, and could only steady himself with a wooden cane, but had to have help going from one place to the next. Astrid showed the children how to lay hands on him, and led them in a rote healing prayer. Astrid said they were pushing down on him so hard, they almost knocked him off the tree stump he sat on.

In a mere moment Astrid noticed the old man’s right leg begin to shake–first his thigh, then from the knee down. The shaking got stronger. Astrid shouted, “Do something you could not do before!” Immediately the old man began stood to his feet. He threw his cane down and began to walk away from them. He walked and walked until he was out of sight. Astrid assumed he was gone, and wouldn’t be back. But minutes later, here he came, grinning from ear to ear and walking normal. He began to testify of the healing power of God! The next Sunday, he went to the local church that had hosted Withrows, bringing his wife and grown children. They received Jesus as savior that day.

Better Than the United Nations

The violence in Burundi is constant and out of control. One of the most exciting reports that came from the PowerClub testimonies was when a city official met Astrid with unusual news. He said their city normally experienced as many as 80 murders every month. But, he told her, “Since you have started your PowerClubs here, the murders have dropped to around 20 per month!”

It seems the PowerClub children were going home to their parents telling them they must forgive their neighbors and bless them and pray for them. The adults began laying down their differences and sharing meals together. The city official told Astrid, “You have done more to help our city than the United Nations has ever done.”

What continues to amaze me, is the work of the Holy Spirit through Kids in Ministry International in places I have personally never been to and with people I have never met. Why? Because it works to raise up children to be serious followers of Christ. This is the heart beat of God to pass our faith onto the next generation.