Mums the Word on Magic

THIS SHOCKED ME when Barna Research came out with these findings: ““Churches and pastors have an uneven – and mostly non-existent – influence on teens’ thinking and actions related to the supernatural. Among some teenagers, their church has considerable impact. However, in many cases, the church maintains little to no influence on youth attenders – either because those teens are finding direction elsewhere or because church leaders fail to address the supernatural.”

In other words, for the most part, churches and pastors are remaining SILENT on issues of witchcraft, magic, casting spells, talking to the dead, blood issues (vampirism) etc.

ACCORDING TO BARNA VERY FEW CHURCHES ARE TALKING ABOUT THIS, LEAVING OUR KIDS AND TEENS LEFT ALONE TO COME TO THEIR OWN CONCLUSIONS.

Many of today’s youth pastors, having not been influenced/ taught against it, so they, as leaders, see nothing wrong with the dark magic clothed in the guise of entertainment, so there is no stop gap there for our teens.

One of the study’s most sobering findings is only one-quarter of churchgoing teens (just 28%) say they have received any teaching in the past year at their church that helped to shape their views on the supernatural world. Overall teens were twice as likely to received teaching on relationships, morals, and ethics, traditions of the faith, and evangelism.

And only one-fifth of teens (21%) said they learned a lot about the supernatural world from their church. It is hard to fathom that church leaders would allow the vast majority of churched teens to go without significant input on this core dimension of faith.”

Maybe it’s that there are so many other overwhelming issues to deal with that the pastors are merely “picking their fights” to where the bigger battles are. Who knows?

At the same time, this year in 2018 Church, the website ChurchLeaders.com posted an articale saying, ”

About 1 to 1.5 million Americans label themselves Wiccan or pagan, according to a 2014 report by the Pew Research Center. That’s more than the membership of some mainstream Christian denominations in the United States.

The rise in witchcraft is likely more than a trend, according to Carolyn Elliott, founder of Witch magazine. “We are in the midst of a beautiful, occult, witch renaissance,” she says. Her comment appears to be in line with the ever-increasing reach of the occult into the general population. In a series of three surveys conducted from 1990 to 2008, Trinity College watched Wicca rise from 8,000 practitioners to 340,000 over the course of those years. Now, as Pew reported in 2014, that number has risen to as many as 1.5 million. 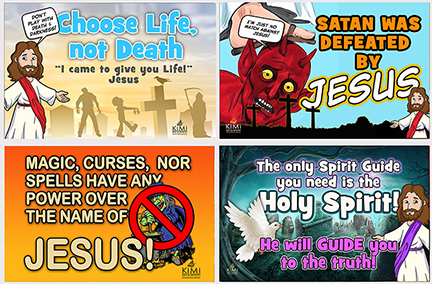 The point is there is almost no biblical education given to our children on this subject. Mom and dad, Open up a discussion! Sit down tonight, pop some popcorn, and dig into your Bibles with your children and look up what the scriptures say about magic, witchcraft, talking to the dead (necromancy) talking to ghosts and spirits, casting spells, and more. If you don’t know where to look, go to your concordance. If you don’t have a concordance, go to an online Bible and do a search for these terms.
Educate yourself and your children!
(By the way, do you like these yard signs? I’ve got 22 different designs just like these that actually educate your children and grandchildren, and the neighborhood kids with biblical truth about this Halloween season. You can purchase yours here: https://buff.ly/2yCdE3w)
Please comment and share.