How to Raise a Pagan Kid in a Christian Home 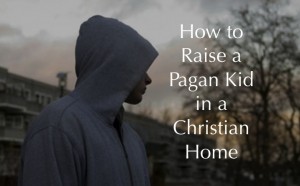 I recently read an article by Barrett Johnson that challenged me greatly. It was titled, “How to Raise a Pagan Kid in a Christian Home.” He began his article by saying we are teaching the wrong things to our kids because we are confused about what our objectives ought to be as Christian parents and leaders. We are tremendously influenced by our culture even as Christians.

His comments were spurred by something he heard Phil Vischer, creator of the Veggie Tales series say. After ten years of writing Veggie Tales, Phil had a revelation that he had actually not been teaching kids Christianity in Veggie Tales at all. But instead had been teaching kids to try to behave like Christians whether they were or not. (Hmmmm…if you have never watched that old movie Time Changer with Gavin McLoud, now would be a good time.)

MORALITY, BUT NOT CHRISTIANITY

Phil was quoted as saying, “You can say, “Hey kids, be more forgiving because the Bible says so,” or “Hey kids, be more kind because the Bible says so!” But that isn’t Christianity, it’s morality. . .We’re drinking a cocktail that’s a mix of the Protestant work ethic, the American dream, and the gospel. And we’ve intertwined them so completely that we can’t tell them apart anymore. Our gospel has become a gospel of following your dreams and being good so God will make all your dreams come true. It’s the Oprah god.” The perfect storm on How to Raise a Pagan Kid in a Christian Home…

(I’ve been very frustrated over the years to find how many churches have used Veggies Tales to babysit their kids when no leader was available. Now I know ever more why these videos bothered me in the way they were being used–a very poor, inefficient alternative to the meat of the gospel!)

BE GOOD CUZ’ THE BIBLE TELLS US SO

Thus, as Barrett points out we can teach our children to “be good because the Bible tells us so” but is that what is going to change their lives? What do we know? We know the Bible message is that we can never be good enough apart from the grace of God. Barrett says, “One leads to moralism; the other leads to brokenness. One leads to self-righteousness; the other leads to a life that realizes that Christ is everything and that nothing else matters.”

This would be why the most common question children’s pastors are asked by parents every Sunday is “Did my child behave him/herself?” It’s as though their behavior is proof of their parenting skills or the child’s spirituality. We have to consider the key objectives of why we encourage moral behavior in our kids. Yes, we want good citizens, and children need to learn good character. But we must remember that good moral character traits in and of themselves have little to do with our goals of walking with God. Good character is the fruit of our relationship with Him, not our lives apart from Him.

THEY STILL DON’T KNOW THEIR GOD

I’ve believed for years through observing children, now young people, who have gone through our Sunday Schools, that a child can know all of the Bible Stories and still not know their God. They can tell you exactly how many stones David picked up in the stream to kill Goliath, but cannot tell you the connection between the Old Testament stories and the New. They can know the story of God creating the world, but don’t have enough understanding to support a biblical worldview, and are easy pray to competing worldviews. They do not have even Bible doctrine in them after twelve to eighteen years of going through our Sunday schools to be able to communicate God’s great love story to mankind in a coherent way. Because we have not taken them seriously as disciples of Christ, they are in every way products of our culture as opposed to the Kingdom of God.

ANSWERS THAT WILL CHANGE EVERYTHING

Johnson and Vischer have pointed out the problem, but they have not given us answers. The answers are:

1. Feeding children the meat and substance of God’s word rather than a steady diet of nothing but Bibles stories that end up being more like Aesop’s fables (“and here’s the moral or the story!”) than the living, breathing Word of God,

2. Equipping them for the work of the ministry, disciplining them to be co-laborers in the harvest fields doing the works of Jesus while they are still children, rather than waiting till they become teenagers to take them seriously, and

As Barrett said, “The world has enough pagans. Even plenty of really nice ones. What we need is kids who fully grasp the reality that they have nothing to offer, but who intimately know a God who has everything they need.”

To read Barrett’s entire article click here: How to Raise a Pagan Kid in a Christian Home

If you would like to know more about how to seriously disciple children for Christ, download a free chapter from my book Redefining Children’s Ministry in the 21st Century.

Read the comments and posts to this article on my Facebook page by clicking here.