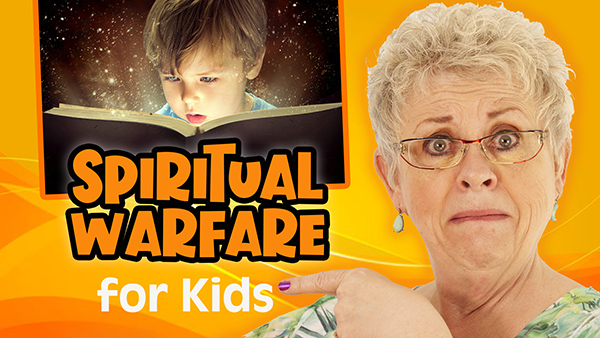 We wrestle not against flesh and blood, but against principalities, powers, and rulers of darkness of this world, and against spiritual wickedness in high places. (Ephesians 6:12)

If you’ve been a Christian for very long you know this Scripture and you know what it means. It means that there’s more to this world than just what we can see with our eyes. It means there is an invisible world, or a spirit world, as well as a natural world. And it’s in the spirit world is where our enemy hides out. When we run up against that invisible enemy we call it “spiritual warfare.”

As adults, we have all experienced that spiritual warfare many times and in many ways. And as we grow in the Lord, we learn how to fight those battles.

Do Our Kids Understand this?

We understand the devil doesn’t play fair. He doesn’t wait until your kids grow up before he attacks them 700 ways from Sunday. But we almost never talk to kids about the spirit world and what it looks like in their daily lives, either because we don’t think they can understand it, or because we don’t want to scare them. We may in passing mention the devil, but to them it may be like a cartoon character.

We may talk to them about the Holy Spirit and the devil and generic terms. But we never we never train them to understand what actually goes on in the spirit world. And we seldom equip them to handle what they are going to inevitably encounter at some point in their lives.

The Whole Armor of God

Probably the most common encounters Kids may have with the enemy is in their dreams – nightmares or night terrors. And I’m going to do an entire teaching on it soon, so I won’t go into detail now. That is true spiritual warfare. And I know of parents who will teach their kids to fight the enemy in various ways with that issue.

But typically when I ask parents if they teach their kids spiritual warfare, immediately they say, Oh, yes! I’ve taught them about the armor of God. Now the armor of God is good as far as it goes. But it takes time for our kids to really understand how to use the full armor of God till they are older. It’s more like a theory when they are little.

But I want to know how do you as a parent train and equip your kids when the real enemy rears his ugly head. I LOVE what my friend Lori Hensley used to do with her kids in real life situations. Listen to how she handled this with her kids.

(Must watch the video to hear this. Not transcribed.)

Start as Early as Possible!

We can’t start early enough teaching our kids how to hear the voice of God. And I have created many resources for teachers, parents, and kids over the years to do just that. I’ll link some of those things and put them in the description below so you can check them out when this video is over. What Lori did is just one way to do this, but what made it so effective is she took advantage of real-life situations and turned them into spiritual learning experiences.

She was teaching them to sharpen their senses or to sense an evil presence when it was near. Listen, our kids need to be able to sense that evil presence in the cartoons they watch, the books they read, the video games they play, and the movies they engage in.

It’s everywhere around us, and we need to teach them how to recognize it and not just slap their hands and say No, you can’t do that. They need to know why and how to deal with it. How many times could we have used that sensitivity when we were growing up? Hebrews 5:14 tells us that we can sharpen our senses and train ourselves to distinguish good from evil. And so can our kids if we teach them how.

Early in my ministry I was teaching the kids in my church how to hear God’s voice by teaching them how to use a streetlight. I have an entire video on this if you want to check it out. I teach them that when God gives us a red light in our spirits it’s a very tight, uncomfortable, feeling on the inside, like a knot in our stomachs, and so forth.

Well, I wrote a puppet skit in which a little girl puppet got invited over to a friend’s house for a sleep over. She really wanted to go, because all of her friends were going to be there. But the mother puppet felt very uncomfortable about it and did not want her puppet daughter to go. But instead of just saying no, the mother puppet told her daughter to go in her bedroom and pray about until she got a clear answer from the Holy Spirit.

The little girl puppet did that, and came out saying that she got a red light in her spirit, so she knew she was not supposed to go. And, as a conclusion, something bad happened at that sleepover, that showed the little girl she did hear from God and made the right decision.

OK,  so as it turned out, the real little girl in my ministry named Courtney (who was the puppeteer for that little girl puppet) ALSO got an invitation to a sleep over that same week. So, Courtney, who had never heard God’s voice for herself up to that time, decided she was going to do the same thing. So, she prayed about going to the sleepover and she got so excited. Because she got a very clear red light in her spirit. She knew she was not supposed to go to that party.

When she came to church the next Sunday, she could hardly wait to tell me about it, because she found out that her friends who had gone were playing a game called “Bloody Mary,” which was a game where they called up dead spirits. She knew she was not supposed to be involved in such things, so it was a huge encouragement to her that she heard the voice of God and was protected from a bad situation.

Be watching for those real-life situations where you can do these same types of things, and your kids will grow spiritually leaps and bounds.