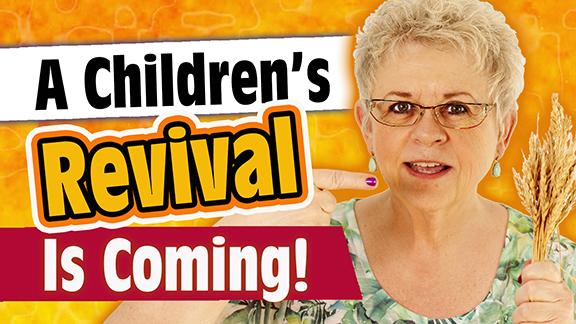 The prophets have been declaring for years “a children’s revival is coming!” Are they right? And if they are, what would that look like?

I saw a quote from Cindy Jacobs of Generals International a few years ago where she said, “I have been prophesying and prophesying that a worldwide children’s revival is coming. If I’m a prophet at all, it’s going to happen.”

She went on to comment that there had been many children’s revivals at various times in history in isolated places, but never a worldwide revival of children at one time.

What role did children play in past revivals?

I am a bit of a church historian in the area of children. I have wondered for many years what role, if any did children play in church history? It seemed history was so silent on it for so long.

I had to do a lot of digging, but a number of years ago i did a teaching on prophetic children in history and have it included in my correspondence school of supernatural children’s ministry. I used the word prophetic as any umbrella term to cover anything of the spirit of God that children were found doing, from healing the sick, to doing miracles signs and wonders, operating in words of knowledge and other gifts of the spirit.

Over the years I have found a plethora of information dating all the way back to 250 years after Christ when Cyprian of cartage wrote about young boys getting prophetic dreams and sharing the interpretations with the church.

In more recent years I have run across fascinating books and accounts of children’s revivals including the Scottish children’s revivals of the 1800s, the amazing prophetic operation of the thousands of the French prophets, better known as the Huguenot children where at one time over 300 children were thrown into jail because they were caught prophesying.

Then came the prayer movement of thousands of children in an area of Europe known then as Silesia that were players in the well-known Herunhut prayer movement under Count Zinzendorf of Moravia that lasted 100 years. It was known for groups of people praying 24 hrs a day 7 days a week, and according the journals of Zinzendorf children were a strategic part of.

So these are well-documented children’s revivals. Prayer seems to be a critical part of the role they play in revivals.

Rick Ridings prophesied about a youth and children’s army for revival weaving together worship, intercession, and evangelism in a depth and intensity that will astound many, but which will bring in the great harvest.

A youth revolution is coming!

Bill Hamon of Christian International prophesied “There is not just a youth revival coming but a youth revolution! You are going to the public schools, private schools, church schools, and home schools. A revolutionary revival is coming to schools from kindergarten through college. You will invade all areas of the world with supernatural kingdom of God.”

I have an entire section on my website where I used to collect and post prophetic word about children. Click here to read them. When this video is over you can go and study what is there. There are many other words, but honestly I just don’t have time to post everything I come across.

So going back to Cindy Jacobs word that a children’s revival is coming. What would that look like? And how would we know when it’s here? Because it’s not going to look like the adult revivals we are accustomed to. Most revivals we are familiar with centered around local hotspots, like Azusa, Brownsville, Toronto, and others.

I suggest to you that with a children’s revival it won’t look like these because children do not have the ability to transport themselves to hotspots. They need their parents to take them. And this will make it harder to spot and identify, because it’s not what we are used to.

Instead I believe that even now revivals of children are breaking out all over the world from homes to schools, to back yards and villages. It’s taking place anywhere the adults in their lives will nurture it and make room for it. And it can also be shut down very easily when the adults around them put controls on the children.
In every nation on earth you can see it if you have eyes to see. Children are worshiping, prophesying, weeping in god’s presence. They are healing the sick, casting out devils and raising the dead! They are being used by god when they are taught what to do and allowed to.

Many of the prophetic words given by these well-known prophetic men and women have still to come to pass. But honestly, I look at this fascinating move of god through Kanye West, and the thousands of young people flocking to his Sunday services, and how many are getting born again. It’s turning into a movement.

These new generations are ripe for an outpouring of the Spirit!

We are living in very unusual days! They are indeed the last days, and I believe that just as sovereignly as God raising up a rap singer to declare Jesus is king, he is going to raise up the children – boys and girls—the Generation Z generation and the yet unnamed generation following them. There have never been generations so ripe for an outpouring of the holy spirit because they are so spiritually bankrupt!

So let’s pray for our children –the ones in our homes and churches, but also the ones in our schools and neighborhoods, the ones wandering the streets aimlessly hungering for something, they don’t even know how to identify.
There is a worldwide children’s revival coming, but it’s going to take you and me and the whole body of Christ to seek them out, pray over them, mentor them, be spiritual mothers and fathers to them.

I would love to hear your testimonies of what God is doing your kids. Leave your comments below. Share this with your friends, and click the like button too.

So be it, Lord Jesus! Come, Holy Spiri,t come!