Train Up a Child Re-Imagined!

Kids in Ministry International Comments Train Up a Child Re-Imagined! 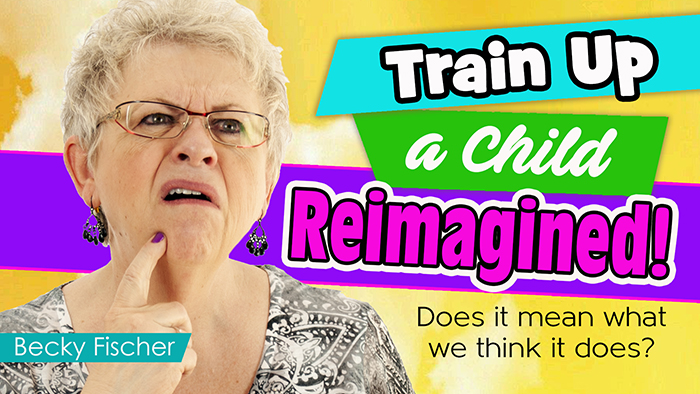 How many times have we heard the scripture from Proverbs 22:6 that says, “Train up a child in the way he should go, and when he is old he will not depart from it”? We quote it a lot. In fact, it’s probably one of the most familiar scriptures to parents and church leaders about our children. But have we really been using that scripture correctly? We’re going to challenge your thinking on this beloved scripture.

What does it really mean when we quote the scripture train up a child in the way he should go and when he is old he will not depart from it?

Well, here is how the modern-day Christians mentally interpret this verse:

“Train up a child in the way he should go, and when he becomes a teenager he may backslide, and go out into the world for a while. But when he is old, he will come back to the Lord and serve him.”

I’m telling the truth, aren’t I? We don’t say it in so many words, but this is the scripture we use to console parents who have wayward youth. It’s like the last thing we feel we can hold on to when our kids go astray. And in many cases, I’ve heard Christians imply that this is the norm—that we should just expect our teens to go out and sow their wild oats because that’s what young people do.

So, then this is our verse to reassure us that everything is going to be ok in the end, and we can look for them to return sooner or later—like when they’re 50 years old and have completely destroyed every area of their lives with sin! Real comforting! Right?

Hang on to your hope!

I don’t want to rob you of your hope. If you have a young person who has strayed from his childhood faith, by all means, hold on to this promise. I truly believe the seeds we plant in the hearts of young children will bear fruit. I actually teach a lot on what we can do proactively as parents to keep our kids from straying from the faith in my school of supernatural children’s ministry and I have it linked below. The Bible promises us his word “will not return void, but it will accomplish what he sent it to do.”(Isaiah 55:11) and this is also a scripture we need to hang on to.

But the statistics of youth-straying-and-coming-back-when-old just don’t bear this interpretation out of this scripture out, at least not in huge numbers. There was a day when that was true, but not anymore. And there’s a ton of statistics to back up my statement! Of course, we all know stories where this has happened. And we rejoice with those families whose prodigals have returned!

But in truth, the longer a person stays away from god, normally the deeper in sin they go, the more rooted in ungodly habits they become, the more life’s tragedy they endure. Then like someone hooked on drugs, it takes a miracle for them to get set free. Those are the stories we do not like to hear about.

There Are Many Reasons They Leave

The reasons kids leave their childhood faith are a list as long as your arm. I did another article on this where I go into great detail in this. Click here to read about it: https://buff.ly/2Sqgsw0

What we need to know for now is the way that we have interpreted this verse as modern Christians is not the way the Hebrew people did back in the day it was written.

Let’s look at the verse again, “train up a child in the way he should go, and when he is old he will not depart from it.” I want you to notice the word “old.” In the strong’s concordance (strong’s number: 2205), the word in Hebrew is “zaqen.” It means “to be old, become old, to grow old, show age.” But zaqen’s root word is “zaqan” which means “beard or chin.”

What Did the Jews Hear?

What a vastly different interpretation they had! Their expectation was that if they did their job training the child he would never depart from his faith at all!

This is SO MUCH BETTER

I don’t know about you, but like this interpretation a whole lot better than what we have assumed it said! And if you know anything about faith at all, you know that it carries “expectation” with it. Our expectations of something can many times be self-fulfilling prophecies! The question then becomes what did the Hebrew people know about raising children that we don’t because they got the results they were expecting?

I spoke a few years ago with an orthodox rabbi comparing how as many as 70% of Christian kids are walking away from the church in our very complicated culture today (which is a separate topic altogether.) But I asked him how many Jewish kids in the orthodox branch leave their faith when they get older.

He told me they didn’t have actually statistics that he knew about, but that anecdotally he estimated at least 80% stay in the faith! Why the huge difference! Our conversation was quite fascinating, but it pretty much all went back to Deuteronomy chapter 6. I encourage you to take the time to read it and pray over it.

Please forgive me, for all you parents who have been struggling with wayward children. By no means am I implying you were expecting this, and if you would have just had a positive mental attitude this would have never happened. Honestly, that is not what I’m saying. I’m using the word expectation more as a Christian culture than for individual parents.

But the Jewish people did in fact know many things about raising children to follow the faith of their fathers better than 21st-century Christians do. I would encourage you to read Deuteronomy chapter 6 for great details. Read it in the NIV or the Common Bible, or something equally simple. As you do think about Psalm 22 training up a child in the way he/she should go.

Here’s a Bonus for You

Now I told you I had a bonus for you. And here it is. I interviewed an Orthodox Rabbi about how he and his wife raise their children, and it was fascinating! Christian parents can learn an amazing amount of effective parenting skills as Jews. Please, if you are a parent, download this and listen to it. Sorry, the quality is not perfect, but it was recorded some years ago when I didn’t have the quality equipment I do now. Anyway, I know you will love it. Download here: https://buff.ly/2SsqgFW

You may or may not know that kids in ministry international is a non-profit 501c3 doing much work in developing nations, which means we need your help in keeping all of our content free to the public. Please consider making a tax-deductible donation today. I’d really appreciate your support here: https://kidsinministry.org/support/