Did you know that one out of every 88 children in the United States is diagnosed with Autism these days? That’s a 130% increase in just the last 10 years. This is a staggering thought.

Just a few years ago, most of us had never even heard of Autism before. The average person still doesn’t know exactly what it is, because it is very mysterious ailment and greatly varies from child to child. All we know is that it’s a big problem for some families. But we feel like, in general, it really doesn’t affect us.

That’s actually a head-in-the-sand mindset, because these children reach into our lives on many levels-from the medical care they have to receive, to the challenges of being educated in our school systems, which are not always equipped to handle children with serious emotional and social handicaps such as these children. And finally, there’s the fact most children’s ministries in our churches frequently just tell the parents not to bring their Autistic children to Sunday School anymore because they simply don’t have the trained staff to supervise them. So whole families just often quit going to church altogether. Should we as Christians care?

Nobody knows what causes Autism, and there is no cure. Any studies that come out indicating a possible link is still guessing.

Some think it is connected to the dozens of vaccinations children receive by the time they are six or seven. Others suspect the pesticides that pervade our food system. But no one really knows. Some say Autism has no cure. But what page of the Bible is that on? 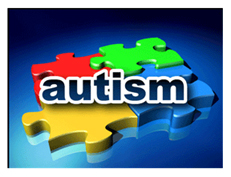 (The official symbol of Autism is a Puzzle, because no one has any answers.)

According to Mayo Clinic and WebMD, the severity of symptoms varies greatly, but all people with autism have some core symptoms in the areas of:

These are just the “nice” symptoms. Some manifestations can be quite severe such as uncontrollable rage, head banging, constant screaming for hours at a time, being inconsolable in their crying, and even bizarre behaviors such as eating rubber, or sheet rock—yes, I said sheet rock.

A few years ago, a concerned mother of a six year old Autistic son called us for help. Her son had all the classical signs of Autism, with some not listed above. Her son, who had become verbal at the age of four after a deliverance session, talked continuously about wanting to go to heaven, angels, and other beings in the spirit world. In addition, he spoke of frightening things like the world coming to an end in 2012, and refusing to play outside because he was afraid every plane that flew overhead was going to drop bombs. He was afraid of President Obama because he insisted the leader was going to release terrorists into our nation. He told his mom one day that someone was going to shoot off a rocket, and the next day North Korea did just that. Where does a 5 or 6 year old child come up with things like that?

What Should I Do?

While the world was telling this mother her son needed to be medicated, and eventually locked away, she was secretly concerned he had gone from autism to schizophrenia. “What should I do?” was her question to me.

As I listened to her stories, something inside of me did not believe there was something wrong with this little boy. I had a strong sense he was prophetic, but just did not have the tools to discern what was of God and what was not. Yes, he had other issues. But I did not believe he was hallucinating.

I found through investigating further, an occasional characteristic of some of these precious children is they become vulnerable victims to the spirit world. This is because of their inability to communicate in the real world. Wrong spirits take advantage of their innocence. A few of these children begin to see being and hear voices. They do not know how to discern between beings who are safe and those who are not. They do not know how to communicate this to their parents. It leads to a variety of problems, the least of which is fear; the worst is hearing voices telling them to hurt themselves or someone else. At this point, the medical world begins to medicate them heavily and some end up in the psych wards of hospitals because no one knows what to do about it. This is all they know to do to protect the child.

A quick search on the internet for “my autistic son hears voices” confirms that I am not making this up. These children and parents need help. PLEASE NOTE: This is NOT all or even most of autistic children. But there is a significant number within the vast ranks this applies to. ALSO NOTE:  This is not necessarily what is causing their autism. It is just complicating it.

I have often wondered if Adam Lanza, the autistic young man associated with the Sandy Hook school shooting, heard “voices” telling him to do what he did.

If your child tells you he or she is hearing voices, believe them. Then seek trusted help with a Christian who is born again, filled with the spirit, and is experienced in deliverance. BE CLEAR: your child is NOT demon possessed—but he or she is possibly being demonically HARRASSED and BULLIED. If you are born again, and love the Lord Jesus Christ, and walking in purity in your own life, you have the spiritual authority, through the blood and the name of Jesus to command these harassing spirits to leave. (NOTE: You have no authority over evil spirits if you are living in immorality or any other ungodly habits and lifestyle.) Then you can teach your child he has the same authority to make the voices or creatures to go away.

Highly Sensitive to the Spirit World

These children by virtue of their sensitivity to the spirit world can also be sensitive to God’s voice and his angels, but they have to be taught. This sensitivity is what makes these children prophetic. But it is a characteristic that has to be protected and nurtured through relationship with the Holy Spirit and His Word.

Bath your child and your home with worship music day and night. Keep it playing in his room when he sleeps at night. While it may be difficult to truly communicate with them, do your best to speak to them about Jesus, his love, and power. Read Bible stories to him if you can. I know I am making this sound very easy, and I realize it may not be.

While I know of at least two testimonies of autistic children who were delivered from demonic influence, and subsequently were set free from autism, I am certainly not saying this is the case in 100% of autistic children, no more than I would try to imply 100% of autistic children eat sheet rock. It’s simply not the case. But it can be one of the issues a Christian parent can explore when seeking help for their child, especially if the family has had any background in the occult or overt immoral habits such as viewing pornography, etc. These types of things are open doors for the Enemy to interfere in our lives. Even if  only one in a thousand children are helped through deliverance, it’s worth exploring in case your child might be that one. Remember, Evil preys on the innocent and helpless.

There is encouraging new research that has recently come out that as many as one-third of children who were diagnosed with autism, “grow out of it” when they get older. Again, no one knows why, but it seems to be linked to children whose parents were highly aggressively in seeking a wide variety therapy and other types of help. I personally know two children who were “classic” cases, and today are perfectly normal. However, among the “therapies” they got was deliverance and spiritual help.

For an article on the WebMD.com website on kids who grow out of autism: http://www.webmd.com/brain/autism/news/20120123/why-some-children-may-grow-out-of-autism

Read this account about an autistic girl named Carly Fleischman in her own words: Carly’s Voice

For further reading by a mother whose son is completely normal today after being delivered from harassing spirits: Defying Autism by Karen Mayer Cunningham