Why Some Kids Have Trouble Speaking in Tongues 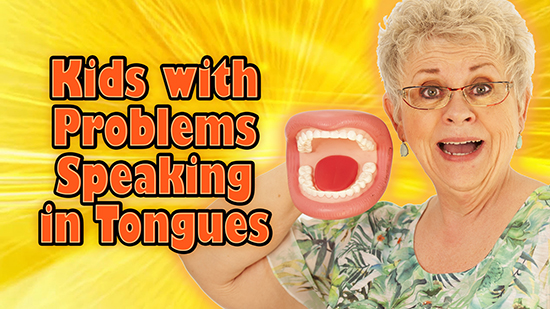 I’m going to share several tips to help kids who are having a hard time receiving their prayer language, that is speak in tongues, and why they might be struggling. Of course, these ideas can work for anyone of any age.

Most Receive Right Away

Over the years I have taught thousands of kids on the baptism in the Holy Spirit and giving them an opportunity to experience speaking in tongues. I’ve noticed that with good teaching and proper instruction, most of them (say half to three fourths) receive right away or within a few minutes of coming forward to receive. But there is always a group that has a hard time, and many of those leave the service without having received their prayer language.

I began to observe and learn there are some practical reasons for this. First of all, notice I said that good teaching and proper instructions are critical for a good outcome. You must start with that to eliminate most of the problems kids deal with. I am not a fan of just adding on an altar call for the baptism to any old sermon if I have not had adequate time to teach kids on this subject. Sometimes this has meant having 2 or 3 different services over a period of time to go into the subject in depth.

Knowledge is power. It takes the confusion away and the scariness away. I have written two curriculums on the baptism for kids. And I highly I recommend them to you. They are “The Holy Spirit and Me” and “Filled with Power.”

So, this teaching is not about how to teach kids about the baptism in the Holy Spirit. You need to get the curriculums for that. The goal is to understand why they struggle and how to help them overcome.

Anytime any of us try something new, it can be very intimidating. Especially when they are called to stand in front of a crowd and “perform.” Of course, it’s not performing, but it can feel like it if you feel like you’ve been put on the spot or that everyone is staring at you. It can be embarrassing! And when that happens a person can just tighten up and mentally freeze.  I try never to put anyone on the spot. I always have the altar calls as groups, so everyone is altogether at the same time, and no one is being singled out. SIDE NOTE – I used to think I had to lay hands on every individual before they could receive, but I threw that idea out the window when I started having dozens and dozens of kids coming to the front all at the same time. There’s a place for that, and it mentions it in scripture, but there are also examples like in the case of Cornelius and his family where they got filled with no one laying hands on them. So, then I observe the group – who’s doing ok and who is just staring around like they don’t know what to do. I will wait for a while to see if they get over it, but eventually, I call one of my trained helpers to come and talk with them or pray so they get personal help.

Make Sure They are Born Again!

But even with that there are still those who just can’t break through. You know what? Here’s a secret! MAKE SURE THEY ARE BORN AGAIN! You can’t be filled with the Spirit unless you are born again, so be sure you ask them, unless you know the child very well, and you are confident they are. IT NEVER HURTS TO ASK EVEN THEN!!!

Another hindrance is some think they are going to do it wrong, and embarrass themselves, or that everybody is going to laugh at them. That somehow when they speak in tongues its’ going to sound goofy. And they it keeps them from going forward.

And some kids just keep standing there trying to figure the whole thing out in their minds. A lot of times they are the more intellectual or older kids. The problem is, you can’t figure it out, because it’s supernatural, and nothing you can logically figure out! It’s harder for them to just step out in faith and walk on the water. But that doesn’t mean they can’t do it. It just might take a little longer.

So, here’s what I tell them while they are still at the altar when we are all done. I speak to everyone, but I address those who were not able to speak in tongues. The Bible says that if you ask you will receive. (Matthew 7:7) So, I say, “If you were sincere when you prayed, then God keeps His word, and He has filled you with His Spirit. So don’t be alarmed that you didn’t speak in tongues right now, because I promise you, your prayer language is there. Here’s what I want you to do. Go home. Get in bed or go for a walk or bike ride all by yourself. Or maybe when you are taking a bath or doing the dishes, or whatever, and when no one else is around, ask God again, please Holy Spirit help me to receive my prayer language. And give it another try”. I’ve had many testimonies of kids who come back and say they tried it, and they were able to break through when they were all alone.

The funniest story I ever heard about this was when I was doing a church conference, and a girl about 12 years old just couldn’t get her prayer language in our service. So, she did exactly what I said. She went home, got in the bathtub to take her bath, and she prayed, and, instantly, she got her prayer language. She was so excited that the next day she called her best friend and told her all about being filled, and her friend wanted to be filled, as well. So, the girl invited her over to her house, and they got in her bathtub together (fully clothed) and she prayed for her friend and the friend got filled instantly and spoke in tongues!

You Can’t Make a Mistake!

Now, let me address the issue of the kids who think they aren’t going to do it right. They think they are going to make a mistake or people are going to laugh at them. I remember the very first time I was invited to speak in a church and there was about 20 to 25 kids and teens. I taught on the baptism, gave an altar call, and 100% of them came to the altar to get filled. I stood them all in a line, and this was back in the day that I thought I had to lay hands on every single person before they could get filled. I started with the teenagers, and it was taking forever to get them prayed through. I looked down at the other end of the line where there were a bunch of 5,6, and 7-year-olds, and I could see they were getting bored and restless. I knew I was going to lose them if I didn’t do something quick.

So, I prayed, “Lord what do I do?” Instantly, the Holy spirit spoke to me and said, “Tell them they can’t make a mistake.” So, I shouted down to the rest of the kids—just give it a try! You can’t make a mistake! It was quiet for a minute, and, all of a sudden, like a flood, there were voices that grew from a whisper to a roar speaking in tongues. Suddenly, kids were shouting, crying, raising their hands, dropping to the floor on the backs and some on their knees. It was wild. It went on for over an hour!!! I stopped and looked at what was going on, and thought “DID I DO THAT???” Up to that time in my ministry, I had never seen an outbreak of the Holy spirit like that. Every single kid and teen got filled that night. It was amazing. A mother of a six-year-old told me the next day that she had asked her daughter what happened, and the little girl said, “Well, Becky told us we couldn’t make a mistake. So, I tried, and I did it!”

I have since written specific lessons to teach kids on this issue, and you will find them in both of these curriculums.

Another tip – I always tell the kids to never give up trying! I say, “I promise you your prayer language is down inside of you. You just have to keep trying to get it out. Never give up!”

I have a full video teaching in my School of Supernatural Children’s Ministry called Children and the Holy Spirit. I highly encourage you to get the download and watch it several times if this is an area of need in your ministry.