IN CASE YOU HAVEN’T NOTICED, THERE’S A CULTURE WAR IN OUR NATION and we as Christians are not winning the next generation for Christ. In a new study, George Barna found, “We [the USA] are a nation now with [very] divergent worldviews. Worldview is critically important because it’s the lens through which we see and respond to the world.”

“In a study we did earlier in the year, we saw that only 10% of Americans possess a biblical worldview,” Barna said, adding it was much higher in previous centuries.  “And so, you see people moving away from biblical truths, and from traditional American values” (which were originally based on biblical views. It’s no wonder our country looks so different today than when I was growing up!) The Next Generation is Biblically Illiterate.

You will most obviously see this divide between generations. My generation, for instance, is much more likely to be conservative, and hold to a biblical worldview, whereas the Millennial Generation is much more liberal, and is known as the most biblically illiterate generation in American History.

Whereas my generation has at least 30% claiming to be born again Christians, the most recent Pew Research poll claims 40% of Millennials call themselves atheists.

That’s the crux of the matter. While we’ve been satisfied to tell sweet, simple, non-offensive, seeker-sensitive-approved Bible stories to our children in Sunday School, the liberal left has been invading the schools, colleges, universities, media, entertainment, news, and every other area of life, and been aggressively indoctrinating our children from preschool on up with liberal, politically correct viewpoints that are the polar opposite of our biblical values and beliefs.

As a result, they are winning the culture war. They saw the big picture, and realized the “prize” was the next generation, while we Christians still argue which one of us has the correct doctrinal viewpoint, and continue to focus on the adults. Too often we are busy avoiding the world, while the world was busy behind our backs getting down to business with our kids. 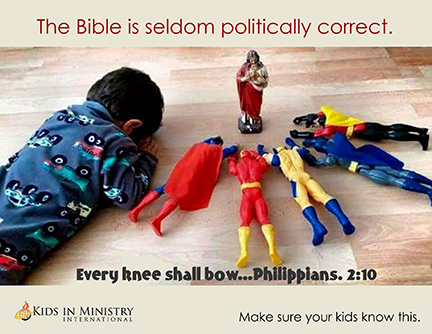 The Next Generation is Ripe for a Move of God!

As we all know, we need revival—another great awakening. While I am tempted to get discouraged, I have to remind myself that this is exactly the climate the Holy Spirit can operate in the best. Where there is darkness, the light shines brightest. And the Millennials have never seen revival in their generation. Nor have the next age group tier down –today’s teens, Generation Z—ever seen an authentic move of God that shifts entire nations. THEY ARE RIPE FOR A MOVE OF GOD!

What does it take to see revival? Well, there’s never been a significant one apart from prayer. We must pray like never before for our children and grandchildren claiming them for the Kingdom. We must pray that the light of Jesus Christ will shine in the darkness. We must be willing to fast and pray making them our primary focus.

A New Standard for Raising the Next Generation

Then for those younger ones still in our homes, we must get serious about discipling them on purpose, deliberately, and passionately. If you have older kids who walked away from God, you must get honest with yourself and ask the Holy Spirit why. Then as He reveals things you could have done differently, make a decision to raise the younger ones by a new radical standard.

Rather than just follow the average Christian culture of relying on the church to disciple your kids, you are going to have to take matters into your own hands and be as serious about their spiritual training at home as you are about getting them to soccer practice and their music lessons. Where are your priorities going to lie? What are you willing to sacrifice to see that your sons and daughters grow up to be passionate followers of Jesus

Then check out my teaching on Creating a Biblical Worldview in your home: https://buff.ly/2D2gFfe

Also be sure and check out our children’s ministry curriculums for spirit filled churches.